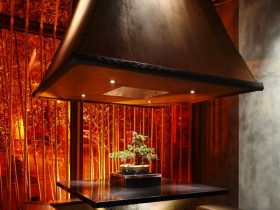 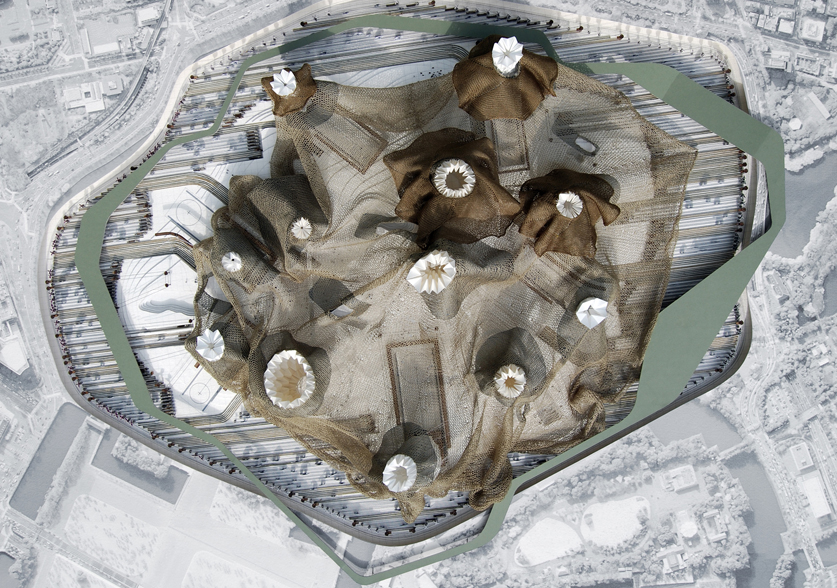 Thomas Hillier designed this Project in Tokyo City, The Emperor’s castle originates from a mythical and ancient tale hidden within a woodblock landscape scene created by Japanese Ukiyo-e printmaker, Ando Hiroshige. This tale charts the story of two star-crossed lovers, the weaving Princess and the Cowherd who have been separated by the Princess’s father, the Emperor. 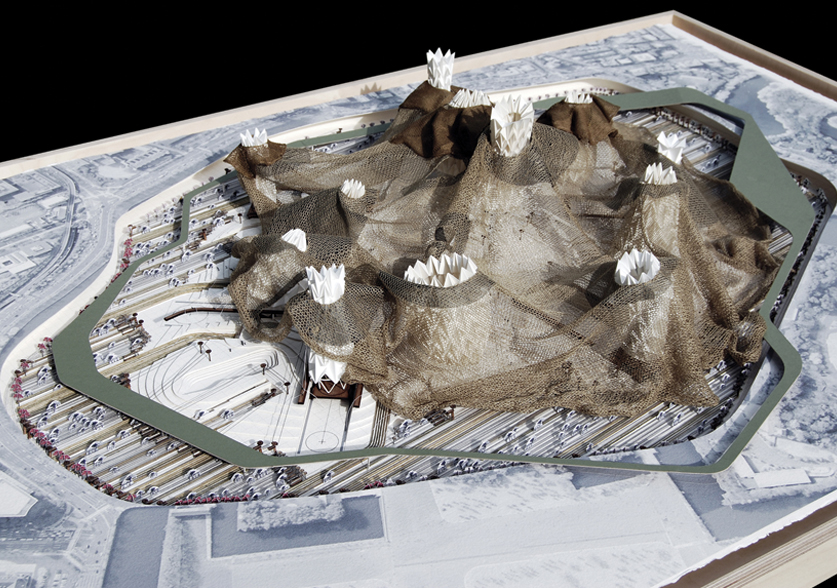 The story begins with four acts that explore the relationships between these characters. Act I introduces the characters illustrating the moment the Princess and the Cowherd fall in love. As time passes the happy couple begin to neglect their duties. The Emperor being a stern ruler who does not tolerate idleness decided to punish the lovers, separating them by a deep and swift lake unassailable by any man. In the final act the Princess’s flying friends the magpies form a feathery bridge across the lake allowing the Princess and Cowherd to renew their pledge of eternal love. 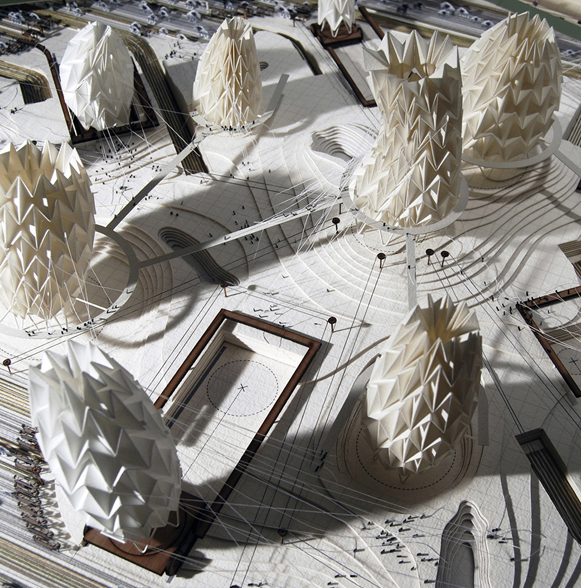 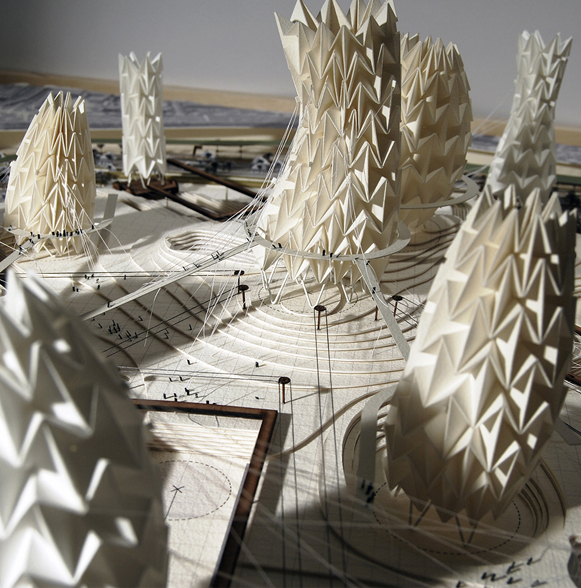 These characters have been replaced and transformed into architectonic metaphors creating an Urban Theatre within the grounds of the Imperial Palace in central Tokyo. The Princess, a flexible, diaphanous knitted membrane, envelopes the spaces below and is fabricated using the surrounding Igusa rush to knit itself ever larger in aim to reach the grass parkland perimeter representing the Cowherd. Linked within this skin is a series of enormous folded plate lung structures. These origami lungs of the Emperor expand and contract creating the sensation of life. The lungs, deployed around the site act as physical barriers that manipulate the knitted skin as it extends towards the outer parkland, these manipulations are controlled and articulated by the Emperor’s army using a series of complex pulley systems which pull back the lungs and the surrounding skin.

This piece of narrative architecture was the vehicle to examine current day cultural and social issues in Japan such as unconditional piety, relentless work ethic, and conservative attitudes towards love.

The way the work was represented throughout was key in illustrating my precise architectural ambition for the project. Tokyo is looked upon as the city of ‘bright – lights’ and fast moving technology, yet within its underbelly still exists the idea of ‘exquisite craft’ that has defined Japan over the centuries, I wanted the Emperor’s Castle to compliment these ideals.

The aim of the Emperor’s Castle was to provoke thought but never patronise or attempt to solve all the world’s problems. 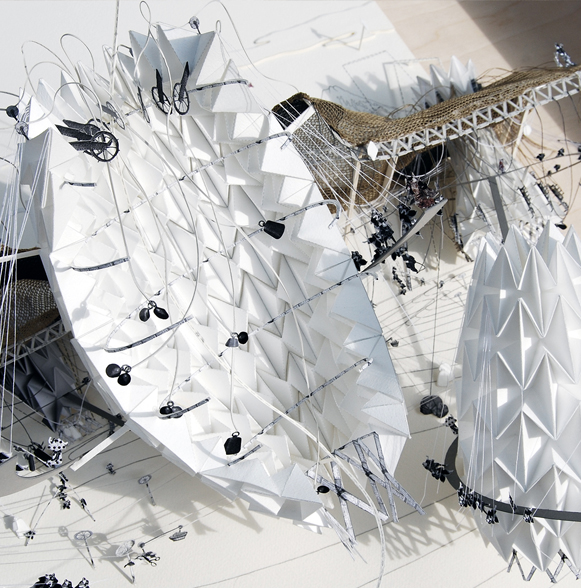 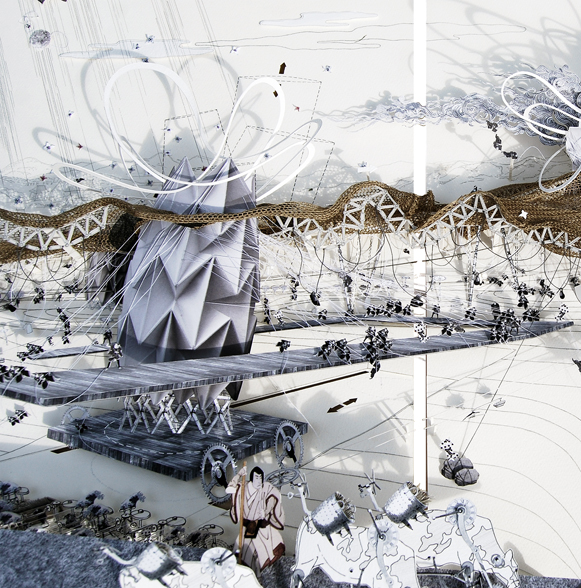 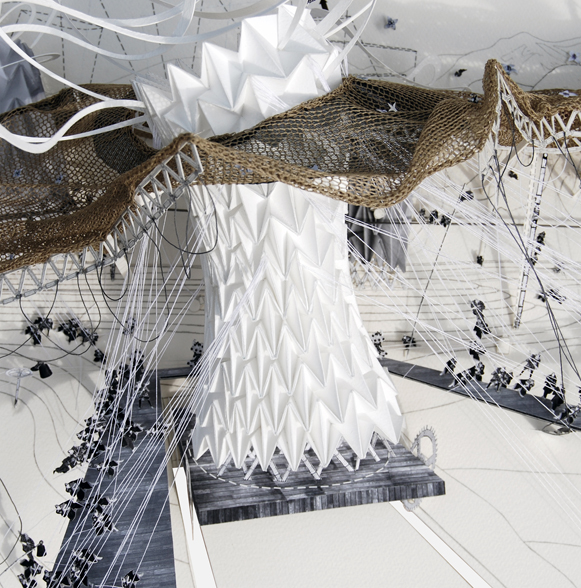