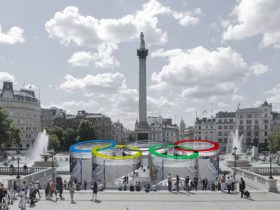 On an underutilized waterfront site that borders the East River and the Eleventh Street Basin in New York City, arch out loud invited students and professional designers to redefine the aquarium typology, examining its relationship to the urban context and the public domain.

The competition proposed the integration of a waterfront park, testing the typically “introverted” entity of an aquarium as well as the nature of the New York City riverfront property that has been largely seized by high-end private residential buildings.

With 556 participants and 178 proposals representing 40 countries and six continents , the designers of the NYC AQUARIUM & PUBLIC WATERFRONT challenged physical boundaries, waterfront flooding issues and the very distinct makeup of what aquariums have been and might become.

The selections are focused on projects that challenge the relationship between city and waterfront, using the aquarium program as an opportunity to bring the city and its people close to the water in a new way compared to traditional parks and aquariums. Another critical element is that most of these have a certain simplicity and that their design communicates their intent rather clearly- but not bluntly-, a critical trait for a project geared towards public use. These proposals go beyond the iconic to start constructing a story, or a fairytale that gets embedded in the life of the city. They emphasize the building of the atmosphere and the experience and in that they are more in tune with our times and the way people try to live life- a life they broadcast, a life in which experiences are more valuable than possessions, a life where we start to understand the consequences that human evolution and pollution have had in the world and try to redefine our relationship with our planet.

The Jury Recognized Projects That:

All three are simple, powerful designs that work to bring their core concept to the foreground and make it easily communicable and ultimately iconic. They are thoroughly, effectively and concisely explained through images, diagrams, plans and texts. The merits of these proposals are self-evident and make them rise above all other proposals within the finalists. 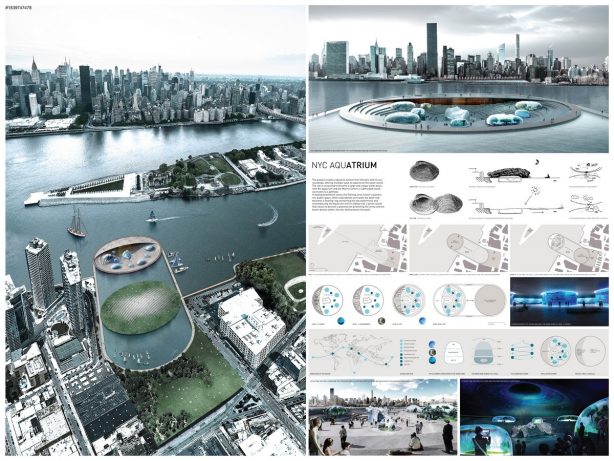 The Building concept is intriguing and alluring; it plays with subtleties rather than with huge or hulking impact that contrasts and plays against the density and grain of NYC in a very poetic manner. The multiple level sectional design is also good and allows for beautifully depicted sensations in the presentation that will encourage a very immersive phenomenological experience.

The experience of being underwater is often compared to being in outer space, and this entry embodies such otherworldly qualities. The boundaries within the project are also interesting, especially how water from the river is contained within the site. The simple geometry is powerful and dynamic creating memorable, transportive spaces. 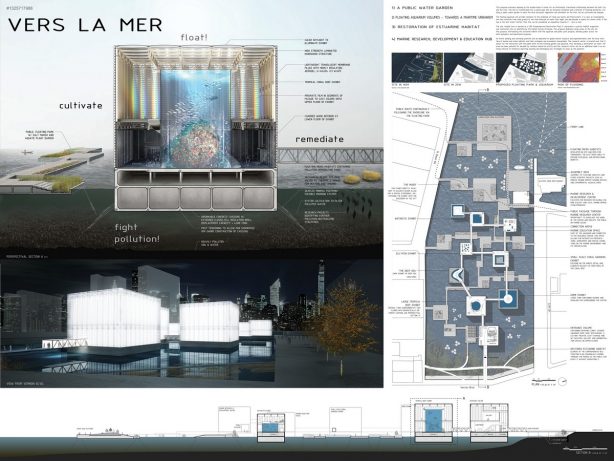 The concept is very poetic. There’s tension within the idea that the buildings are floating on the water, yet their program demands that they also be filled with water. They seem more like boats than buildings. There is also a strong sense of exploration as one meanders on the boardwalk paths between pavilions.

A floating maze configuration over water that meanders through glowing cubes and expresses a symbolic will to sustain life is admirable. One would stand on one side of the floating deck and see layers of people and cubes and appreciate the harmony of nature and manmade. It’s an urban park over water that let you and others be the facade of the project as visitors participate in moments of wonder. 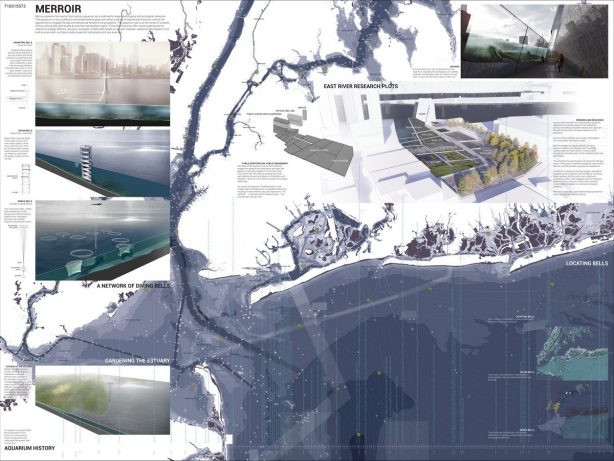 Merroir questions what architecture and our built environment is. It questions what an experience of nature should be and it gives a non-conventional answer to the question of an aquarium. It questions taking animals away from their natural habitat, and therefore avoids the creation of spaces that try to recreate a ”natural environment”. The project is in the line of evolution of what a zoo or an aquarium is: a place for research and pedagogy. The proposal challenges the old centralized model to provide a distributed answer in which the animal does not serve the eye of the public, but where the relationship between man and animal is reciprocal. In which nature and humankind cohabit and do not compete. 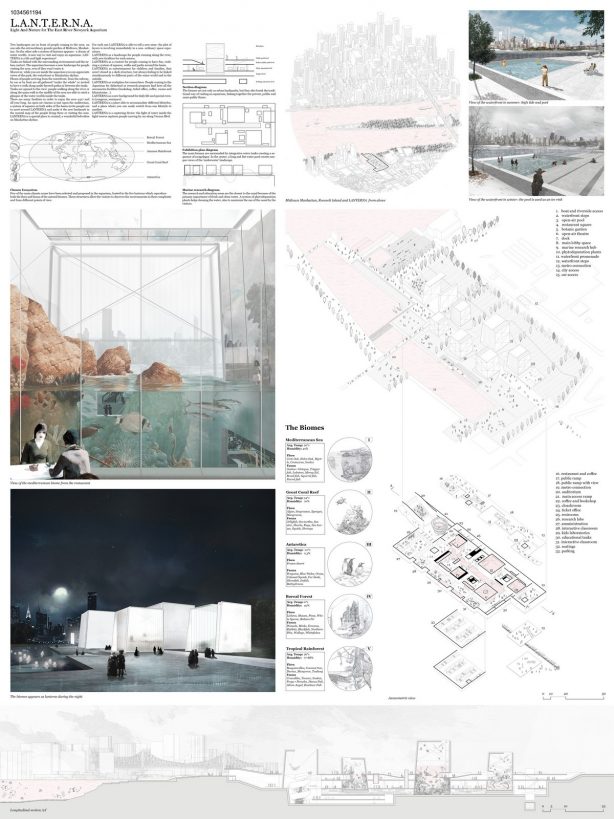 Light And Nature for The East River New York Aquarium Two landscapes appears in front of people coming to the area: on one side Manhattan, on the other side a system of lanterns, a new way to enjoy an aquarium: L.A.N.T.E.R.N.A. is a life and light experience! The aquarium becomes a new landscape for people, even if they won’t enter it. They are invited to have a walk along multi-layered paths in between the tanks which are linked with the surrounding environment and the urban context: while walking outside you are able to glimpse the inside whereas from the interior you can appreciate the park, the waterfront , the skyline. 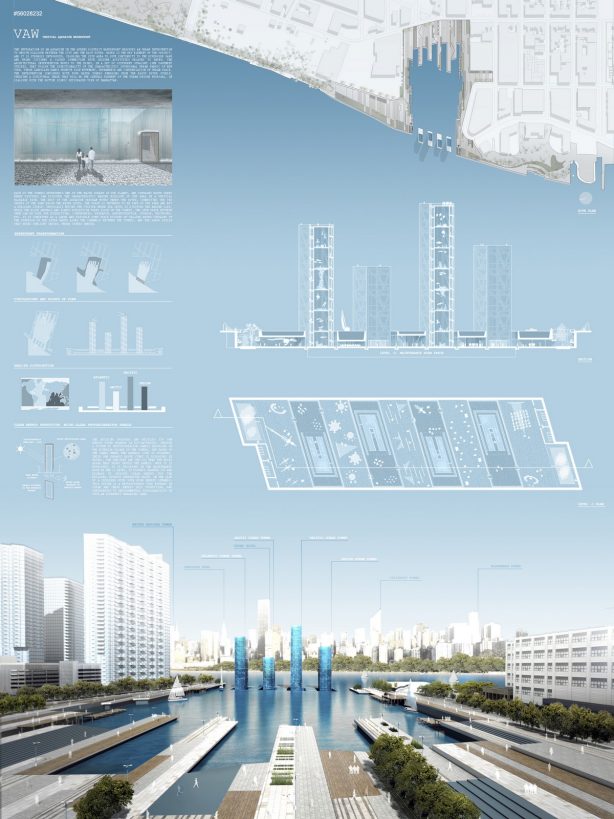 Water is the key element of the project and it is strongly introduced, flooding the site area to give continuity to the riverside park. The architectural intervention moves to the edges, in a set of different straight line pavement stripes, that follow the orthogonal urban fabric of New York. These landscape bands promote slow movement, permanence and contemplation of urban space. The intervention concludes with four water towers emerging from the East River itself, creating a sculptural image that will be the central element of the urban design proposal, in dialogue with the bottom iconic skyscraper view of Manhattan. 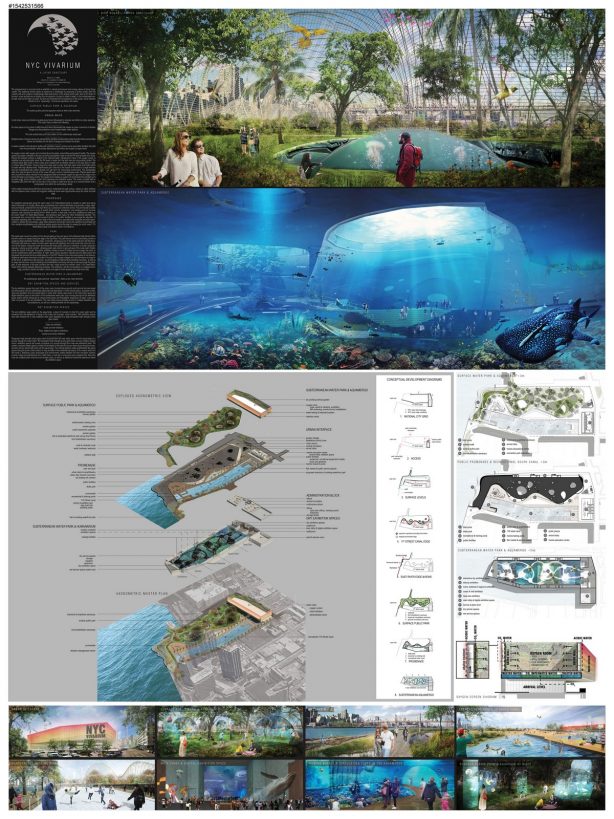 The proposal aims to reconnect and re-establish a natural environment and ecology where all living things coexist. The traditional private nature of aquariums is challenged by proposing a surface public park that coexists with and sustains a subterranean water park below. In the surface public park, seen as the realm of humans, ‘ocean animals’ are on display, thus an aquarium (a place to relate to water). In the subterranean water park, seen as the realm of the ocean, humans are immersed into the experience of the ocean, and is therefore referred to as a “aquamergo” (immersive experience into water). 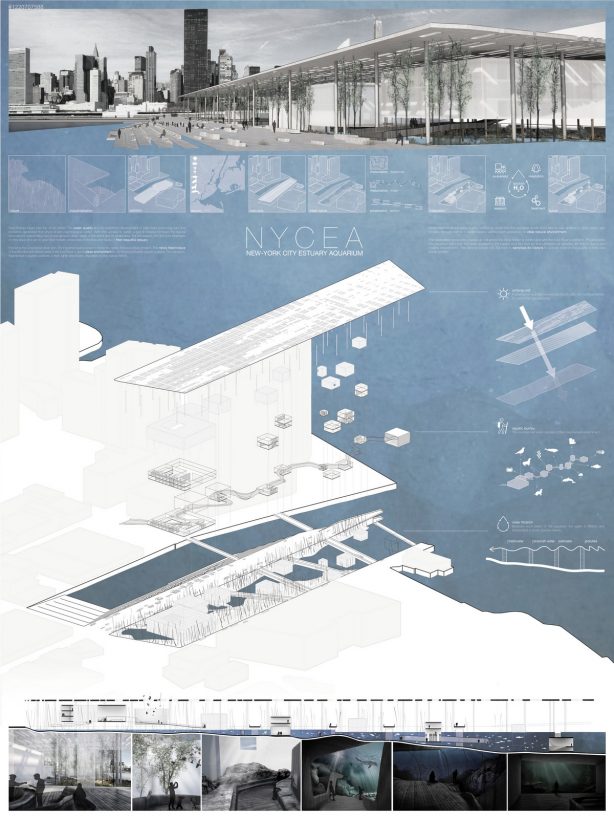 NYCEA puts emphasis on the issue of pollution in the Hudson river and aim to give New Yorkers awareness of flora and fauna of their estuary. The industrial layer is raised releasing the nature original state. The fragmented aquarium is slightly and linearly filed on this nature to give a clean environment for the aquatic species. The exploration ends with a wake-up call where the New Yorker is face-to-face with the pollution in the East river. The future of NYCEA is an aquarium without any walls between the basins and the river, where all species live in a healthy environment. 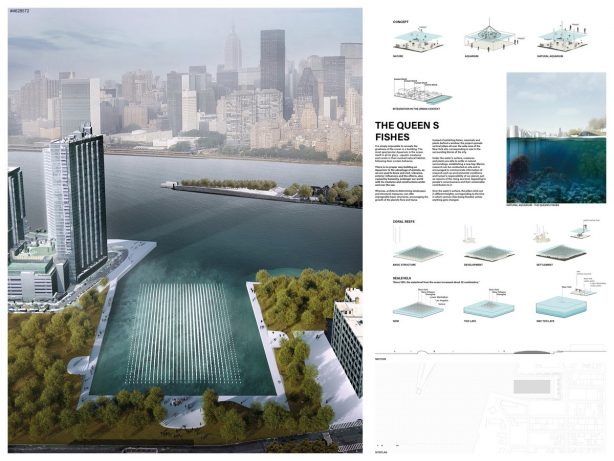 There is no proper way to build an Aquarium to the advantage of animals, as we are used to visit. The most spectacular Aquarium is the ocean itself in all its glory and its beings in their evolved habitat. Spreading pillars all over the site, offers the possibility of developing an uninterrupted undersea life. It certainly evolves by itself and induces the ‘Natural Aquarium’. On site marine researches can be done by pedestrians on the waterfront get informed by surrounded points of information, while taking a look down under water, observing fishes and corals in their natural behavior.