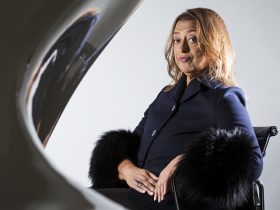 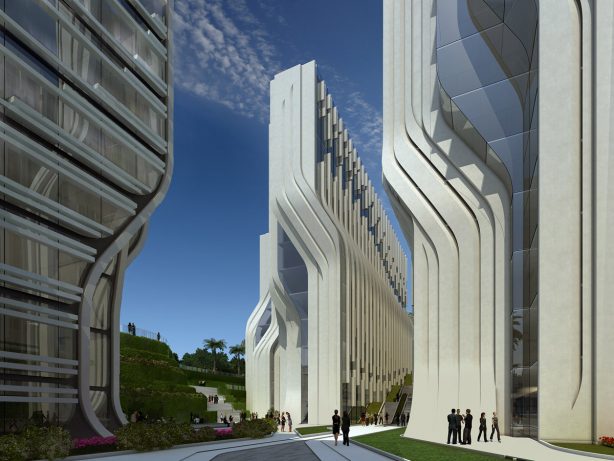 The New Cairo City site optimally positions the Stone Towers to offer state of the art offi ce facilities to a rapidly expanding Cairo. The programmatic variety of the Stone Towers creates a rich mixed use environment for offi ce tenants. The 525,000 m² development also includes a five star business hotel with serviced apartments, retail with food and beverage facilities and a central feature landscape referred to as the ‘Delta’. 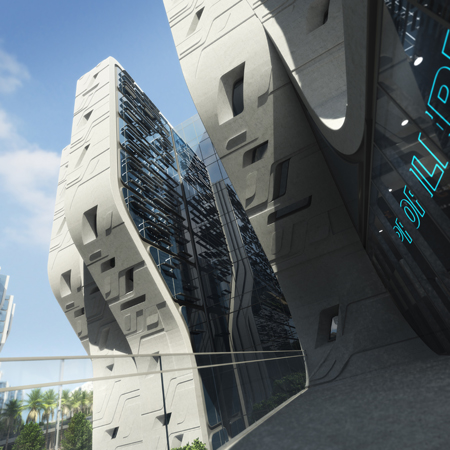 The design mediates the two distinct edges of the site – the high-speed ring road to the north, and the Stone Park residential component to the south. With such a large scale project, care must be taken to balance a necessary requirement for repetitive elements while avoiding an uncompromising, repetitive line of static building masses. The architecture of the two bounding edge conditions pursues a rhythm of interlocking, yet individually differentiated building forms. This is complemented in the plan and section where the building edges visually interlock and merge with the landscape, creating a cohesive composition. Egyptian stonework, both ancient and more recent displays a vast array of patterns and textures that, when illuminated by the intense sunlight of the region creates animated displays of light and shadow. 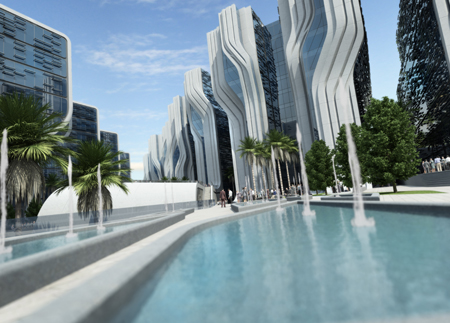 The effect is powerful, direct and inspiring. The Pre-cast façades on the north and south elevations of each building edge emulate the effect using a vocabulary of alternating protrusions, recesses and voids. The richness observed in the intricate patterns carved into minarets and Egyptian Hieroglyphic patterns, with their variations in repetition and density have contributed to the abstract pattern specific to Zaha Hadid Architects’ design for Stone Towers. Deep shadow lines reveal and accentuate the form of the north and south façades which reference the elegant curvatures seen in Egypt’s ancient relief carvings. 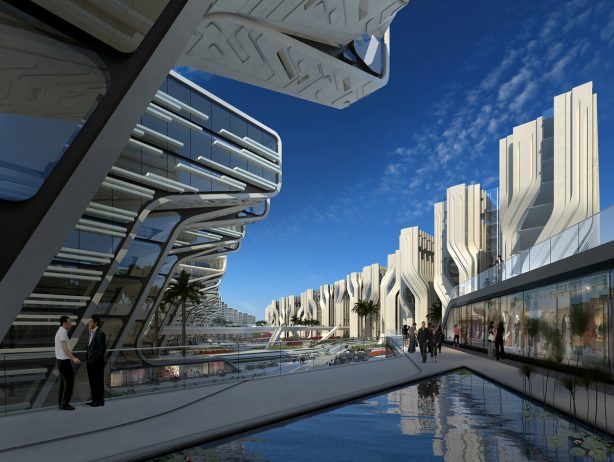 The North Edge buildings are taller and more vertical than the South Edge in response to the ring road at its north border. The 9 North Edge buildings form a gentle S-curve in plan along the edge of the slip road creating pockets for landscaping at the entrance drop-offs. The skewed orientation of these buildings creates two different effects when observed driving either west or east. From one direction the louvred East Façade is more prevalent. From the other, the curving, solid pre-cast façade dominates. Additionally, the building set-out creates a high degree of self shading for the more transparent east and west façades. Each building follows a similar set of rules, yet each building is entirely unique. Viewed from the north – south elevations, the buildings splay at the base or at the top in an alternating rhythm.

The South Edge buildings are located adjacent to the residential development to the south, the South Edge is lower in height and angles away from the drop-off edge. The buildings seem to emerge from the landscape as a series of ribbons forming a different condition facing the delta from the condition mentioned above facing the residential. To the delta side, a dramatic cantilever emerges becoming progressively more pronounced moving from the west to the east. When all South Edge buildings are viewed together, the entire edge has a strong visual coherence. The cantilevers project into the landscape offering fantastic views out for the offi ce occupants. Additionally, the narrow office floor plate ensures generous amounts of daylight will reach all areas of the office interior.