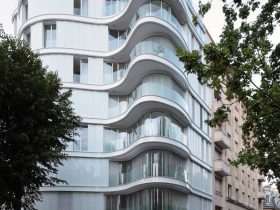 ECDM designs a wavy elevation of apartment building in Paris

Wangjing SOHO is a mixed-use development , designed by world-renowned architect Zaha Hadid, has received the Zhan Tianyou Award for engineering.

Named after the ‘father of China’s railways’, the Zhan Tianyou Award is the highest honour for engineering and innovation in China’s civil and structural engineering industry. Established in 1999, the award is approved by China’s Ministry of Science and Technology as well as the Ministry of Construction for the award’s promotion of scientific and technological innovation and the successful applications of new technologies.

A 521,265m² mixed-use development consisting of three tapering towers that are 118m, 127m and 200m in height, Wangjing Soho’s design brings together the surrounding community in a popular new 60,000m² public park at its base.

Employing advancements in design, material and construction technologies, the application of 3D Building Information Modeling (BIM) in the design, construction and management of Wangjing Soho significantly increased efficiencies while also reducing the energy consumption and emissions of its daily operations.

Winner of the 2014 Emporis Skyscraper Awards, the world’s foremost prize for high-rise architecture, Wangjing Soho also received the 2016 Excellence Award from the China International Exchange Committee for Tall Buildings (CITAB) and Chicago-based Council on Tall Buildings and Urban Habitat (CTBUH) with the support of the Architectural Society of China. Recognising architecture that makes extraordinary contributions to the advancement of tall buildings and the urban environment, the CITAB/CTBUH jury awards projects that achieve sustainability at the highest and broadest level to enhance cities and the lives of their inhabitants.

With all units in Wangjing Soho towers 1 and 2 sold before completion, SOHO China retained units in tower 3 to develop successful new opportunities for the company; using the exceptional adaptability of the interiors to provide units on short-term leases booked via the ‘SOHO 3Q’ smartphone app. ‘SOHO 3Q’ has grown into the largest shared office community in China, offering flexible spaces for the many diverse talents within China’s new start-ups and rapidly developing IT and creative sectors, as well as established industry leaders.

Completed in 2014, Wangjing Soho is one of four project collaborations between Zaha Hadid Architects and Soho China that total 15 million square feet (1.4 million m²) of award-winning office and retail space.

Zhang Xin, CEO of SOHO China explained: “China attracts the best talent from around the world. It’s important to work with architects who understand what the next generation requires; connecting communities and traditions with new technologies and innovations to embrace the future.”

About Wangjing Soho:
Wangjing Soho is located in northeast Beijing and served by Wangjing and Wangjing East subway stations on Line 15, the Wanging West interchange station with Line 13, as well as the new Futong and Wangjing South stations of Line 14. The site is approximately halfway between Beijing’s Capital Airport and the centre of the city. Access to each of these key transport links has defined Wangjing Soho’s fluid composition.

Developed in the mid-1990s, Wangjing has become an important employment, residential, transport, educational and cultural hub in the north-east of Beijing; integral to the multi-modal urban plan for the capital that enables growth without impacting existing social and infrastructure networks in the centre of the city.

Located in Wangjing’s centre, Wangjing Soho is a mixed-use development consisting of three towers 118, 127, 200 meters in height designed as three interweaving ‘mountains’ that fuse architecture and landscape to bring together the surrounding community in a new 60,000m² public park. The design responds to the flow of the city around the site and allows natural light into each building from all directions. The juxtaposition of the three towers’ fluid forms appears to change when viewed from different directions; as individual buildings in some views, or as a connected ensemble in others. The orientation and composition of the towers directs visitors and staff to the various transport links that surround the site; their cohesive design creating an anchor and identity for the growing community in Wangjing.

Wangjing Soho’s thin floor plates provide flexible, open plan office space with tapering sections that brings extensive natural light throughout all offices, retail areas and lobbies. Windows on every floor can be opened to enable each office to be naturally ventilated when appropriate.

About SOHO China:
SOHO China is the largest prime office developer in Beijing and Shanghai. The company translates high quality designs in prime locations into real estate with a strong appeal to investors, local businesses and their customer bases.
In 2014, SOHO China established a US$100 million endowment through their foundation to enable underprivileged children in China to attend universities around the world.

About Zhan Tianyou:
Known as the ‘father of China’s railways’, Zhan Tianyou (1861-1919) was a pioneering Chinese railroad engineer who constructed the first railway in China without foreign assistance – the Beijing to Zhangjiakou line. A founding member of the Chinese Institute of Engineers, Zhan Tianyou was awarded an honorary doctorate by the University of Hong Kong in 1916 and elected to the American Society of Civil Engineers in 1909.