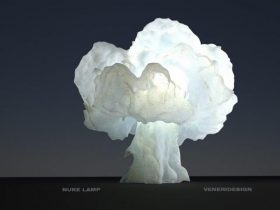 Pushing the boundaries of shoe design with the latest materials and most advanced 3D printing technology.

UNITED NUDE – leading footwear brand, and 3D SYSTEMS – the inventor’s and leaders of 3D Printing, are joining forces for a major collaboration project + exhibition, which is to be launched at Salone del Mobile 2015 (14th – 19th of April) in Teatro Arsenale, Via C.Correnti 11 – Milan.

A select group of 5 of the worlds leading architects and designers are exploring and challenging 3D printing technology by designing 3D printed ladies high heels.

The Re-Inventing Shoes project is about exploring and pushing the boundaries of this rapidly developing technology by creatingshoes with the largest amount of sculptural freedom.

The production method used is the highest quality of 3D printing (SelectiveLaser Sintering) in a hard Nylon and all-new soft Rubber material. UNITED NUDE have figured out a way to combine harder andsofter 3D printed parts for creating fully functioning shoes. Each shoe will be available as a up to 50 pair limited edition.

With the design for UNX2, we wanted to dress the foot in such a way as to make its form partially visible, to highlight the mechanics of the foot and the visual effects that can be created by the shoe in motion. 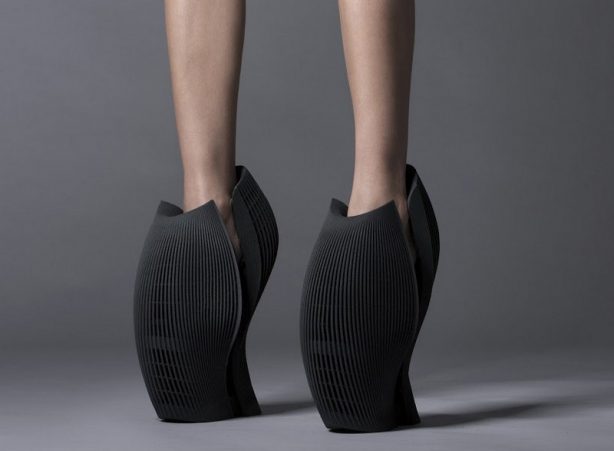 We were particularly interested in the kinds of images the shoe could create, both when static and when in motion. When the wearer is still, the curve of the foot can be glimpsed within the shoe and the dynamics of movement are suggested by the curving vertical ribbons that envelop it. 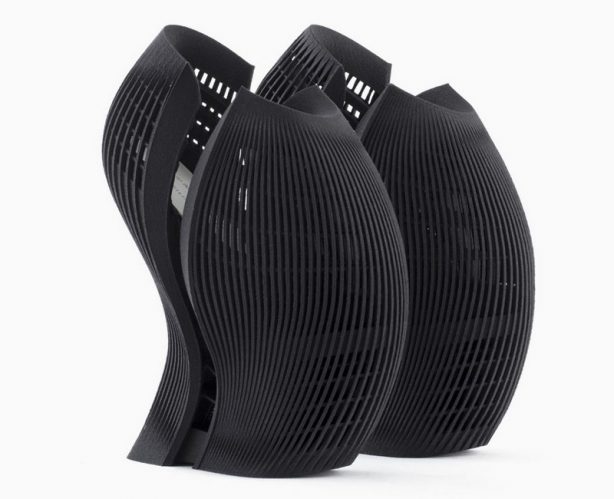 However, once the wearer begins to move, shifting levels of transparency are created and the vertical lines create a staccato rhythm reminiscent of early stop-motion photography. The UNX2 shoe creates patterns of movement and produces a dynamic form of image-making through motion.

It was also our intention to make visible the “process” of design in the final object: the digital strategy that was employed when testing the position of the foot within the shoe. So there is a kind of literal transparency, but also a phenomenological transparency that reveals both the process of design and the processes of movement.

The vertical ribbons and the hoof-like shape of the shoe elongate the legs and create an almost animal-like extension.

Informed by the flickering light of fire, the Flames shoe is the most recent collaboration between Zaha Hadid and United Nude. 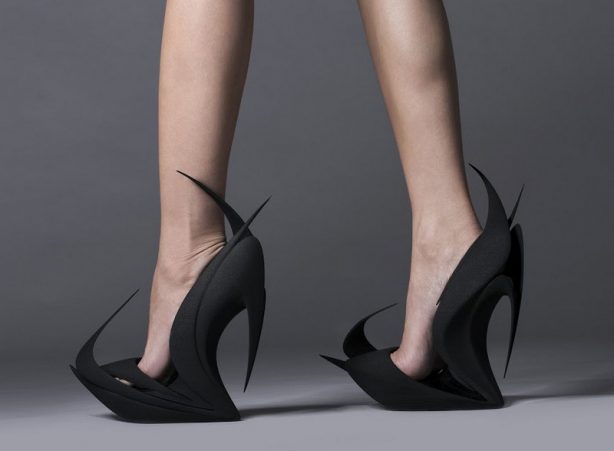 Flame-like bands originate from the point of the heel, rising upwards to gently embrace the foot, while the ergonomically optimized foot bed provides comfort and support. 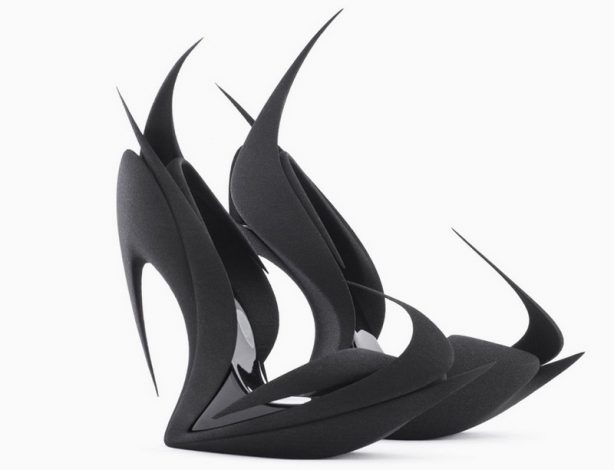 The sculptural sensibility and experimentation of Hadid’s architectural language and United Nude’s expertise in manufacturing the most innovative designs has embodied the shoe with the essence of fire – delicate and ephemeral, yet compelling and dynamic.

The freedom afforded by the unbridled free form sculpting of advanced 3D printing is totally invigorating and emotionally stimulating; a new World of aesthetics that from the inception of the software, our studio has endeavored to be a the forefront of optimizing this potential within the field of Industrial Design for the last 15 years born out of architectural academic process and research into natural phenomenology rather than the self referential stagnating World of design. 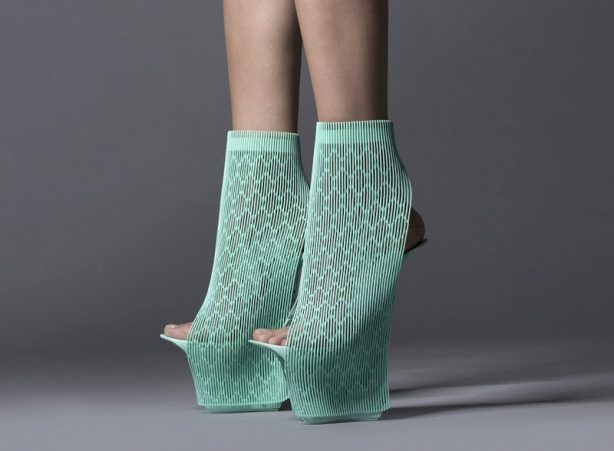 We have entered a second renaissance that is like a spaceship moving away from an analogue Earth into a Nebula of extraordinary abstract beauty that will lift our psyche to new limits of speculation and biomimetic understanding…..closer in fact to our true instinctive view of a non linear World. 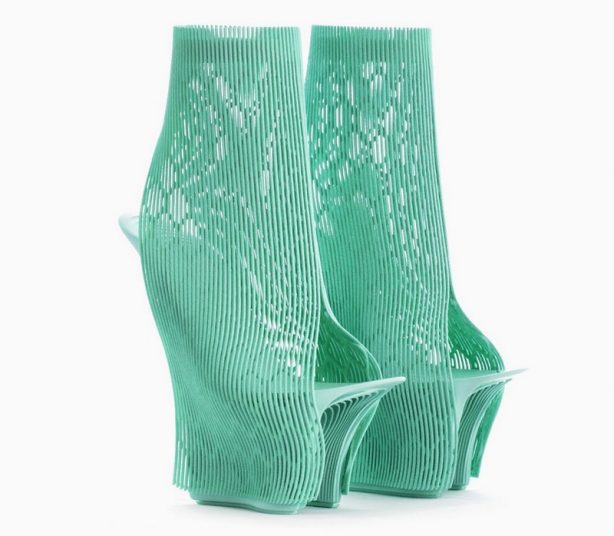 So, mindful of this moment of divergence I have sought to ground my concept on core female anatomical beauty first scanning the foot to retain the sophisticated surfaces that hard and soft physiognomy can naturally provide.

This is a fundamental principle in all of my work as form and structure is generated from genesis principles that guide and hold the concept true to its objectives.
Remaining sincere to the optimized possibility that advanced software can provide my shoe seeks to benefit from a structured underlying design process that innovates through systematic modeling and remodeling to find a point of convergence between all things considered.

I have used this project to establish a moment where physical innovation in materials density and layered matrix node structuring, are coalesced to enhance the sensuality of the female form whilst remaining clearly technological….ultimately the shoe has been truncated to extending the perception of verticality and in doing so eliminate weight and mass which for me is a symbol of decadence.

The filaments or hairs have been modeled using particle systems and attraction- repulsion logistics paralleling the bionic geometry of the foot.
The complex tridimensional polygon mesh provides what is termed a Watertight Geometry whereby nothing is extraneous either in material volume or functional characteristic.

This modeling convergence benefits from the dynamics of gravity and particle attraction hence the subconscious references to the cosmos and the greater forces of attraction and repulsion.

At the intersection of the geometry of nature, the human body, and the cosmos, the design of this shoe finds its beginning—in the geometries calculated through mystifying yet rational natural numeric sequences. It is these radial organic movements that inspire the shoe—grounded in a moment of literal connection between the human body, the earth we live on, and the universe of which we are part. 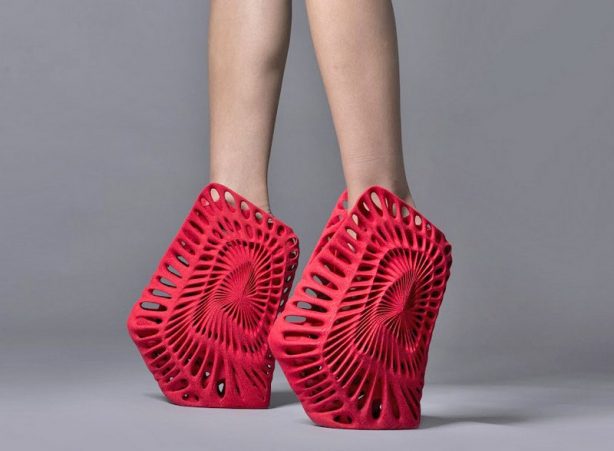 Organic geometries have been studied by some of the greatest mathematical minds since ancient Greece, and the connection between the human body and these numeric sequences can be seen throughout works of architecture, art, and design. But the human body is one of the most important organic structures and infrastructures, which we often take for granted. Our connection to nature is deeply rooted in the intricate makeup of our systems and our skeleton, empowered by our muscles to allow rotating motions that move our bodies through space. 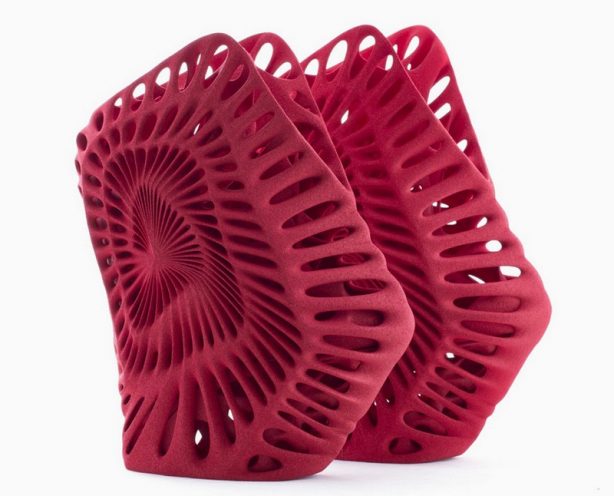 Man simultaneously has an inherent connection to the cosmos, an environment so large we still cannot fathom its true size. Its limits are still a mystery, yet its workings are visible on all scales in our daily lives. In the cosmos it is the celestial bodies, which rotate around each other in concentric turns, creating energies that we feel even within our core.

Yet it is the availability of advanced technology today, which make possible a design such as this. Intertwined in this shoe are the old and the new, the organic and the exquisitely man-made, growing together to become simultaneously timeless and forward-looking.

This shoe uses the most cutting-edge 3D printing technology both in design and execution, but the result is a shoe that could have been an object found in nature, a delicate fossil that has been buried on the bottom of the ocean for millennia.

Working on this project has allowed the office a unique opportunity to explore and expand within a rare dimension. 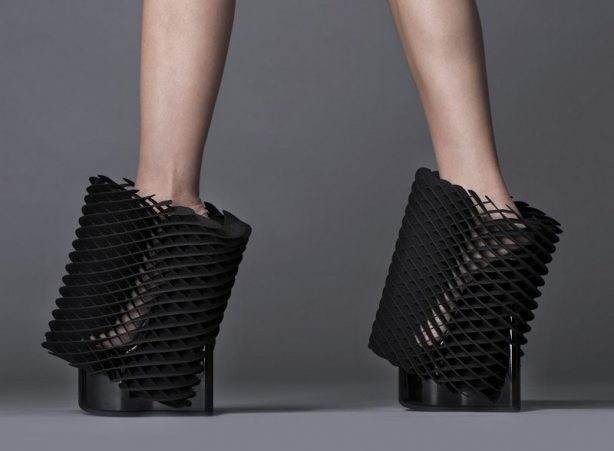 As a design office we are often working within strict parameters for client briefings so designing without boundaries on a shoe that is created to push the productions skills of United Nude and 3D Systems is rare. 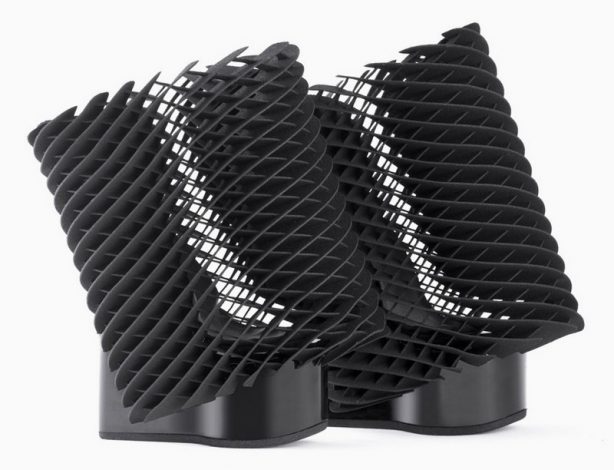 Combined with our own extensive experience in 3d technology we have created what we consider a refreshing approach to the way a shoe may be can be perceived.

The process and material allowed us to create this unique lattice work that builds upwards around a heeled shoe to create a boot with the tactility of lace work that is in fact both durable and flexible at the same time.