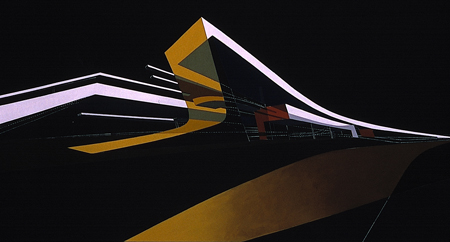 The project is designed to serve as an event and exhibition space for the garden festival in Weil am Rhein 1999. The suggested structure does not sit in the landscape as an isolated object, but emerges from the fluid geometry of the surrounding network of paths. Three of those paths entangle to make the building. Four parallel, partly interwoven spaces are caught in this bundle of paths. One path snuggles up to the south side of the building, another, gently sloping, rises over its back, whereas the third path cuts diagonally through the interior.

CLIENT:
City of Weil am Rhein