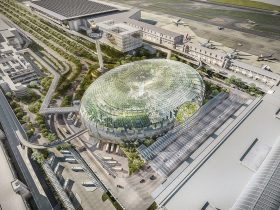 The Block 18 in New Belgrade is the geographical center of the city of Belgrade. Located on the banks of the river Sava, in the last three decades it has been illegally occupied which gave rise to a situation of degradation and isolation. The project aims to redevelop the entire block by opening it to the city and making it the socio-cultural center as well as geographical. Taking into account the Master Plans of Belgrade since World War II on, and trying to finish what they had started, the block is split with the extension of the existing urban grid. Within the grid are found three nodal points within which are placed three new buildings, the Botanical Garden, the theater of the Belgrade Philharmonic Orchestra and a multifunctional skyscraper.

Also extends the walk along the river that does not stop under the highway but continues connecting the block to its neighbor , spread the movement on foot and by bike, transportation privileges the tram that runs already on one side of the lot and it connects well to the entire city and finally closes the entire block 18 to the movement of cars. The new grid is rotated towards south-north, so that the new buildings will be oriented in an ideal way and create new relationships. First, the theater of the Philharmonic with the rotation looks straight the iconic multi-purpose theater of the Sava Center, which incorporates the shapes and it connects directly through a red canopy. The botanical garden then takes place in the south and is inclined towards it to better accommodate the sun’s rays, while the skyscraper is located on the north side where it is connected better with the city and the financial district. The roof of the theater is lowered to create a roof-garden with feature stands for the open-air theater.

The skyscraper is shaped circular because that is best suited to continental climate in Belgrade. The connection with the triangular base is solved with the creation of a large square covered by a double hyperbolic paraboloid in ETFE, anchored between two large arches on the ground. The building is multi-functional, it can be found in offices, hotel, apartments and on top a group of restaurants and bars. The functions are marked by a different section of the building and are separated by squares-indoor gardens and walkways outside, which have an angle of 30 ° for better orientation to the south. The north side of the building has five pillars that continue over the roof of the building up to 311m (1 meter beyond the Shard of London, the tallest building in Europe) and include panoramic elevators. In this way we wanted to scan the building vertically as it is typical for Belgrade high-rises . The colors are also a reference to the old Serbian architecture that have always been white with black edges , so too has the skyscraper black edges and white vertical walls that run horizontal sunshades. This are designed to shade the facade during the hottest hours of summer and allow the sun to come indoors during the winter. In addition, they also host various technical functions as the solar panels to the south, integrated networks perforated metal that serve as shade when the sun is low, and the sides serve as air vents and heat exchangers. The building structure is reinforced concrete, this structural type and not the steel, was chosen for the lowest cost and for greater ease in achieving inclined pillars, as well as a long and good tradition Serbia has in reinforced concrete.