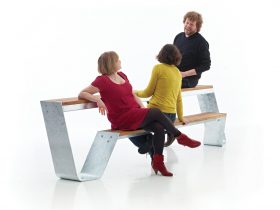 Trolleybuses Gardens are electric vehicles which make them more environmentally friendly than fossil fuel or hydrocarbon-based vehicles when implemented in the city.

The power is not free as it has to be produced at centralized power plants, however, it is produced more efficiently making it more responsive to pollution control than individual cars exhausting noxious gasses at street level. A trolleybus draws power from overhead wires using spring-loaded trolley poles made from wood and metal, which complete the electrical circuit by transferring electricity from a “live” overhead wire to the control and the electric traction motors of the trolley bus, it is a type of current collector.Each trolley pole, trolley bus elevation, tire, overhead wire and terminal station structure will contain 3d printed piezoelectric cells generating electrical energy from pressure deformation in these semiconductors in order to power onboard electronics as well as light immediate neighborhoods. The city of Belgrade uses trolleybuses as one of its major modes of public transport with an extensive route stretching across the city and the suburbs.

Printed piezoelectric cells are embedded into the main body of the helix structure and the suspended cluster of conducting wires connecting the building to Belgrade’s trolleybus infrastructure of overhead power lines. Piezoelectric materials generate electrical energy when subjected to mechanical strain, vibrational energy harvesting is used in this design, generated by trolleybus pulses as they pass through the station and rain falling onto the cluster of suspended cables.

The piezo cells are stacked within the folded cross section which further increases the vibration within the structure from the trolley poles, the kinetic displacement deforms the semiconductor cells, in turn amplifying the output; wind and rain also vibrate the cluster of steel wires which connect the project to existing overhead wires, these vibrations magnify the piezoelectric cell displacements as a result of the kinetic movement; the design acts as an electrical amplifier, providing street lighting, Internet WiFi access for immediate neighborhoods as well as offering an adaptive power port, commuters will be able to charge mobiles and smart cars at these trolleybus station gardens. The generated electric current is used to stimulate roots and plant growth, the park next to the terminal also benefits as the trolleybus terminal powers the irrigation and sprinklers.

The trolleybus garden acts as a capacitor and transistor to step up the harnessed electrical energy, transforming AC current from the piezoelectric cells to DC current before it can be cached in the capacitor ready for distribution.

The architecture supports the idea that energy harvesting, smart materials, and systems need to be an inherent part of the design process, dictating the terms of the architectural design criteria rather than referring to sustainable technology as a polite afterthought. This project follows the Piezoelectric Playground also in Belgrade.