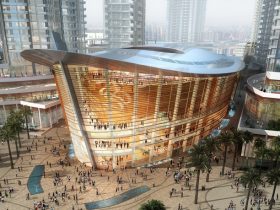 520 west 28th residences is a new iconic building for New York city, Designed by Pritzker Prize-winning architect Zaha Hadid and developed by Related, One of the largest developers of luxury residential properties in New York, this boutique condominium building will offer 39 exclusive two- to five-bedroom residences by the renowned Iraqi-British architect and artist.

Located in Manhattan’s West Chelsea, the 11-story building is situated next to the popular High Line park, which stretches from the newly opened Whitney Museum at its south end to the Hudson Yards development at its north.

520 West 28th Street’s design captures the richness of its vibrant and historic urban context. A fascinating interplay between the city and the High Line has created a powerful urban dynamic among the elevated park and surrounding streetscape. This same dynamic is evident within the design; an interconnected chevron separates and merges the building’s two distinct zones, further establishing this contextual relationship and giving each residence the highest degree of originality.

An integration of volumes that flow into each other, the design follows a coherent formal language to create the sensibility of the building’s overall ensemble. With an arrangement that reinvents the spatial experience, each residence will have its own distinctive identity, offering multiple perspectives and exciting views of the neighbourhood.

The 11-story development will feature approximately 37 residences of up to 5,500 square feet with 11-foot ceilings, technological integration and tailored interiors. Designed with multiple elevator cores, a majority of the residences will have a private vestibule and entrance that adds to the intimacy of the building.