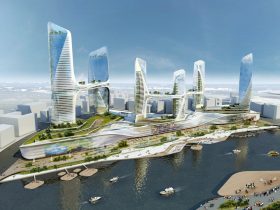 The Chameleon is a First prize winning competition proposal by WWF architects, this parametric design was developed after a thorough site analysis, and is predominately concerned with principles of bio-mimicry. for example, the hexagonal parametric shapes that dominate the facades are derived from cell structures. the office also draws from, as you may have guessed, the Chameleon and its highly-adaptable skin.

The latter has several connections to building elements, including nighttime LED illumination and integrated thermo-regulation. Climate control is accomplished through smart adaptable facade units — i.e. the hexagons — which mechanically adapt to the sun’s trajectory. when receiving too much heat, each component closes to seal the structure. Likewise, when too cold, or dark, they open.

The office has fixed PV nano cells located in portions of exterior walls that collect sunlight throughout the day. energy that isn’t expended for the building’s daytime needs is used to illuminate thousands of LEDs at night. this is regarded as a mirror of the structure’s dynamic inner activity, the animal itself, and on a more conceptual level, the collective, constantly changing mood of its inhabitants.