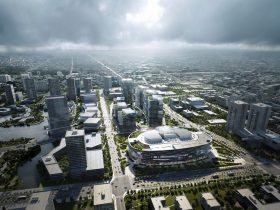 The new Zhivopisnaya residential tower is located on the Zhivopisnaya river front park in Moscow. The proposed architectural design of Zhivopisnaya Tower is a development of the modernist theme of the ‘tower in the park’, dissolving the podium into the towers’ body and creating one single entity, embedding the base and roof with a civic program, and opening the building into the surrounding parkscape .

The tower’s mass is carved by sinuous lines in a choreographed movement, creating four blocks that are joined by a system of three cores. The tower is generated through an elastic extrusion, incorporating diversity in its primary volume and enabling the creation of different apartment typologies within one overall modular frame. The cores’ transparency breaks down the building mass into slender volumes and contains all common circulation and infrastructure. The panoramic lifts capitalize on the breath taking views over the Moscow River.

The buildings reflective envelope and transparent cores contribute to an interesting play of reflections and intersections with the river and the sky. The subdivision of the tower into different blocks allows for a differentiation in the access to the reception and concierge services, as well as to the apartments, underlining the exclusive profile of the development.

The apartment types range from studios to four bedroom duplex and work as families, where different spatial modules are combined and organized to create the different dwellings. The tower base accommodates a retail boulevard as well as other amenities like health club, gym, spa, solarium, nursery, and restaurant. The roof garden offers a bar esplanade and winter garden with spectacular views over the city.