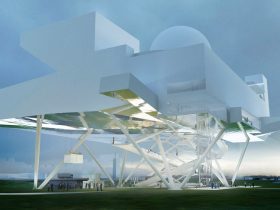 Dame Zaha Hadid has been announced as the winner of the 41st Veuve Clicquot Business Woman Award.

Created in 1972 as a tribute to Madame Clicquot, the Veuve Clicquot Business Woman Award champions the success of business women worldwide who share the same qualities as Madame Clicquot:  her enterprising spirit, her courage and the determination necessary to accomplish her aims.  It is the first international award created specifically to recognise the contribution that women have made to business life and is now regarded as the “Oscar” for female entrepreneurs and business leaders.

Veuve Clicquot owes its extraordinary reputation to a remarkably modern woman:  Madame Clicquot.  Married in 1798 to François Clicquot, owner of a Champagne business, and widowed at 27, she took control of the business and was one of the first women to lead a company of men.  Proud and strong-willed, she always demanded “only one quality, the finest.”

Dame Zaha has grown to become one of the most influential architects in the world.  With her firm, Zaha Hadid Architects, she has designed many of the most renowned buildings around the globe such as the MAXXI Museum in Rome and the Guangzhou Opera House in China. Her critically acclaimed works in the UK include the London Aquatics Centre for the 2012 Olympics and the Evelyn Grace Academy in Brixton, the Riverside Museum in Glasgow and the Maggie’s Centre in Kirkcaldy. As well as shaping the language of architecture, she has also been a role model for female businesswomen in male dominated industries.

In 2004 she became the first female recipient of the Pritzker Architecture Prize, the most prestigious prize in architecture. She also won the Stirling Prize for two years running for her work in Rome and London. She was awarded a CBE in 2002, and DBE in the 2012 Birthday Honours for services to architecture.

Alongside this, Dame Zaha has made an extraordinary commitment to theoretical and academic work. Having taught at the Architectural Association until 1987, she has held numerous chairs and guest professorships at universities around the world. She is currently a professor at the University of Applied Arts in Vienna and Visiting Professor of Architectural Design at Yale University.

Dame Zaha’s commitment to philanthropy was also recognised by the panel. Through Zaha Hadid Architects, she has supported a number of charities through auctions and pro bono work, including Maggie’s Centre, the NSPCC and Women for Women.

Dame Zaha Hadid, on receiving her award, said: ““It’s hard to believe, but it’s still difficult for women to break the business barrier. Through perseverance and hard work, I’ve been able to do so, but it’s been a long struggle. When I started my career in architecture it was very much a male dominated industry, but in recent years I’ve seen a growing number of talented female architects join the profession and succeed. This Veuve Clicquot Business Woman Award shines a light on our achievements; and I hope it encourages more women to continue with the profession.”

Christina Jesaitis, Senior Brand Manager, Veuve Clicquot said “Dame Zaha has made her mark across the globe with iconic works that will inspire people for decades. Not only has she had a huge impact on the world of architecture as a whole, but she has demonstrated great zeal as businesswomen, growing Zaha Hadid Architects successfully, adapting to change and demonstrating fantastic CSR credentials. She displays the same passion and determination that Madame Clicquot possessed over 200 years ago.

We are so grateful that Dame Zaha has accepted this award, and as such, marking a stake in the ground for future generations of entrepreneurs.”

Guest speaker for the evening, Dame Marjorie Scardino, previous Veuve Clicquot Business Woman Award winner in 1996 noted, “I am delighted to attend an event that shines a light on the exceptional contribution women make to business life. The work that Dame Zaha has done in developing a successful global business in a previously male dominated environment makes her a worthy recipient of this year’s Veuve Clicquot Business Woman Award.

Awards like these help show how much things have changed in the last 50 years, and help confirm how inspiring and influential women are as leaders. I hope that all this, means that one day we will get to the stage where we don’t have to make a distinction between men and women in the workplace.”