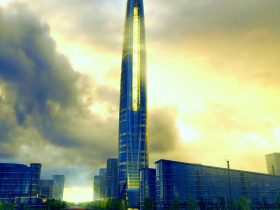 The new China cultural center by Zaha Hadid Architects incorporates a contemporary art museum (MICA), an 1,800-seat theatre with supporting facilities and a multipurpose hall. Its organic architectural language is defined by pedestrian routes that weave through the site to connect with neighboring streets.

Providing views of the adjacent Meixi Lake from the city and giving access to the parks and walking trails on the lake’s Festival Island, this ensemble of three separate cultural institutions creates external courtyards where pedestrian routes intersect for outdoor events and sculpture exhibitions.

The largest and most versatile cultural center in Hunan province, the Culture & Arts Center connects directly with its station on Line 2 of Changsha’s new Metro System.

The new china international culture center is located on historic trade routes through China, the city of Changsha’s traditions as an important center of communications continues as one of the country’s leading media hubs with the centre’s Grand Theatre hosting a popular program of performances and television productions.

Designed for the widest variety of performing arts, the Grand Theater provides all front-of-house functions in sculpted lobbies, bars and hospitality suites, as well as the necessary ancillary functions including administration offices, rehearsal studios, backstage logistics, wardrobe and dressing rooms.

The Small Theater is characterized by its flexibility. This multipurpose hall with a capacity of 500 seats can be transformed to different configurations to accommodate a broad range of functions and performances that span from small plays, fashion shows and music performances to banquets and commercial events.

Totaling 115,000 sq.m, these three civic institutions are uniquely defined and separate, yet complement each other with different opening times creating vitality throughout the day and evening. The theatre becomes active as the art museum begins to conclude its day-time operations, whilst the variety of events in the smaller theater ensure it will be used at all times. 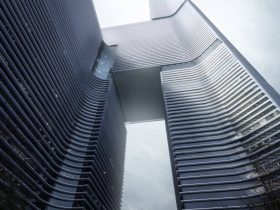