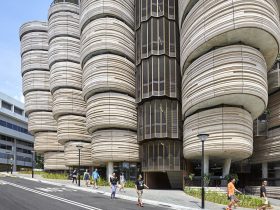 Pritzker prize-winning superstar architect Zaha Hadid’s One Thousand Museum condo tower, soon to rise in downtown Miami. Details of the tower have been extremely scarce, with only a few images leaking out so far. Well, at least that was the case until an anonymous tipster (thank you anonymous tipster!) sent it all to Curbed Miami today. One Thousand Museum will be Zaha Hadid’s first skyscraper in the western hemisphere, and a signature building of the Miami skyline. But enough with the grand overtures, what have we learned about the project?

The corner cutaway is a beacon attracting the attention of pedestrian and vehicular traffic at ground level. This multi-height cut-away is a feature entrance that will attract high-end retail or restaurant tenants, as well as, becoming a memorable destination point for the Clientele.

The drop-off Entrance is carved from the podium volume to announce the arrival point to the tower. The lobby is a nearly continuous, fluid form connecting what is interior to the exterior drop-off lanes. Material consistency inside and out will also unite the spaces.

A restrained material palette and color scheme are envisaged where color is used sparingly against a neutral background to accent areas or items of interest. Integrated and concealed lighting will be used throughout to illuminate surfaces and to accentuate the form. One senses the strength of the tower structure through the lobby ceiling where carved recesses and swirls of light accentuate the structure as it penetrates the space.

Podium Amenity Deck
The podium amenity deck is the natural separation between podium functions and the residential tower component. One enters the amenity deck from the lift lobby and is immediately immersed in the surrounding and very sculptural architecture – as if moving through a large piece of art. Fitness and spa areas are associated with the amenity deck so that recreation, rigorous physical exercise, and relaxation are all on offer here.

Pools, water features, and landscaping create an environment unlike any other experienced in a luxury condominium tower. The podium is conceived as a sculptural extension of the tower with the amenity deck design complementing the geometric logic of the exoskeleton. The tower exoskeleton pushes into the podium deck to create pools of water resulting in a rich spatial variety.

Similar to erosions, pools vary in depth and are at times shallow water features within the composition of the landscape. The pool, landscape and water feature configuration also helps to zone the deck into areas for sunbathing, outdoor grilling and outdoor exercise.

Top Of On Thousand Museum Tower
The exclusive top of tower amenity zone benefits from some of the best views Miami has to offer. It combines aquatic activity, outdoor lounge with sunbathing, and events space into a multi-height, split level area.

The lower level incorporates the lap pool, pool deck, sun deck, work out facilities and lounge areas. Event space, pre-function rooms, and private dining sit on the upper amenity level. The event space has double height views over the pool to one side and views of the bay to the other.

Above the top of tower amenity levels, a volume appears to be suspended within the exoskeleton which conceals the Mechanical equipment. Clad below in metal panel and screened above with a silver mesh, it is a signature feature when viewed from below, as well as above. A helipad rests on top of the volume where residents can arrive in the utmost luxury to OTM and then proceed to the ultimate arrivals / departures lounge. Waiting Friends and relatives enjoy top of tower views through a glass window in the parapet looking to the East.

The Mood
The contrast between the solid, massive exoskeleton structure and the crystalline glazing system beyond is one of the defining characteristics of the tower. A similar design approach to the tower and podium helps to unify the design so that it appears as one coherent architectural vision.

Podium
The Podium façade is largely solid, both to express a solid volume that has been carved into and to conceal the car park beyond. Although the façade appears solid, perforated panels are used to allow for the necessary ventilation. GRC cladding is perforated with a gradient pattern at the asymmetrical podium extensions, while perforated metal panels are used to infill the areas of the podium exoskeleton. Metal panels are used here positioned with a slight horizontal kink to match the façade glazing of the tower. This helps to ensure visual continuity between tower and podium.

Tower
The structure is integral to the unique expression of One Thousand Museum tower, appearing as a continuous piece of sculpture from podium base to the top of the tower. This continuity also occurs inside and out. GRC casings enclose and form the concrete exoskeleton structure so that external cladding and internal finish are achieved simultaneously with the same material.

The contrast in materials between the matte, cementitious expressed structure, and the smooth, reflective glass façade gives the impression of a crystal behind a structural, sculptural framework enclosure. Resembling a sun-bleached artifact, the exoskeleton wraps itself around the crystalline glazing system. The interplay of form, reflection and shadow characterize the appearance of the tower. The tower’s powerful form outlined by the exoskeleton contains a rhythm of deep recesses for balcony placement. Reflections on the facets of glass contrast the shadows cast across the balconies. The continuously changing reflections and shadows animate the tower throughout the day.

The Glass system pushes and pulls about the structure like a dynamic crystal within the exoskeleton frame, providing balconies where the deep recesses occur. Balcony rails are angled slightly to heighten the dynamic of the façade with animated light reflections. This slight angle also establishes a horizontal crease in the façade when it clads the tower up to the slab edge. Horizontal ripples appear to cascade down the entire North and South facades while vertical folds occur on the East and West facades at the balcony recesses.

Nearing the top of the tower, the exoskeleton plays at the corners. Within the split, a horizontally folded glazing system reflects the sky and is a key feature of the full-floor condominiums.

More Images of Zaha hadid’s One Thousand Museum Tower in Miami, click on for larger image: