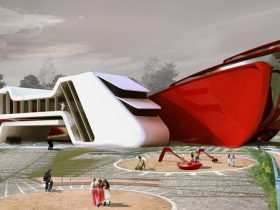 Architect Zaha Hadid fires back at critics who have compared the design of her Al Wakrah stadium in Qatar to a vagina, describing the comments as “embarrassing” and “ridiculous”.

Speaking to TIME magazine, Hadid said: “It’s really embarrassing that they come up with nonsense like this. What are they saying? Everything with a hole in it is a vagina? That’s ridiculous.”

The curved, open roof is meant to evoke the the sail of the dhow, a traditional fishing boat common in Qatar. “Honestly, if a guy had done this project,” she adds, critics would not be making such lewd comparisons.

Earlier this week Zaha Hadid Architects unveiled the design for the stadium, which is one of several new structures that will be built to host soccer matches during the Qatar 2022 FIFA World Cup.