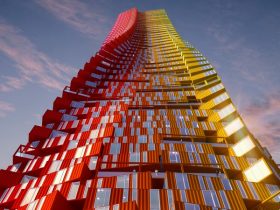 Ctrl+Space announces the winners of its Venice Re-Creation Center Competition.

Venice is a city that gives us a view of the past but at the same time it can show us a glimpse of the future. Its particular conditions generated a whole new type of city that has managed to sustain urban life in the most unique way. Simultaneously, this competition managed to provide answers that refer back to ways of dealing with the past, contemplating present needs and also discern what lies ahead.

Under a strict set of guidelines, the most successful projects were able to answer the programmatic needs with a high degree of effectiveness while guiding the discussion through other issues of relevance into the problematic at hand. Out of the rich cultural heritage of the context, participants were able to distill architectural solutions from different aspects of the problem. The theme of urban reactivation is a fertile ground for solutions that bridge Architecture with other areas of knowledge to retrieve the space from its present state of dilapidation and decay. An acknowledgment that the recovery of this space is also the process or returning the site to the community, the improvement of quality and captivation of the public interest was of extreme importance to reach optimal solutions.

The proposals have shown a deep reflection over the issues surrounding different theories of preservation: by interfering, by not interfering, by cleaning up or completely wiping out. It was also brought into question how a reprogramming of the site can be accompanied by a physical transformation with the biggest benefits for its users and visitors. Some strategies showed that the integration of arts and creativity that were used in the past to treat patients would at this time be used back to restore the site itself to full use. The issue of the functional endurance was also pivotal, the validity of a solution that can successfully adapt and subsist in time and avoid a functional obsolescence. This competition also had as a purpose to challenge participants into thinking about the different life-cycles of buildings that sometimes outlive the architect and what steps can be taken in order to ensure the functional durability of the buildings we produce. Some discussions that were presented have local interest but also can be projected to a global scale, for instance, the ripple effect that a successful intervention of this type can bring to other cities and to the preservation of neglected buildings.

“What crawls after the dusk?”
by Marcin Kitala and Zygmunt Maniaczyk
from Czestochowa, Poland

From the Jury: “The Jury acclaimed this innovative concept that tries to go beyond the idea of functions and explore a secluded spot in the lifecycle of buildings.

Preceded by a compelling narrative, the visitor’s path throughout the building is dramatized, the buildings are personified and reality is elevated to a fantasy status. The visit becomes an expedition. By crossing a Wall, which then becomes a border to reality, a deep forest is found inside, a hidden wonder that embraces the buildings. The narrative is evocative of a fantasy world, reminiscent of Tarkovsky’s “Stalker”. Similarly, the visitor follows a guide around crossing unexpected sceneries and confronted with prodigious aspects of reality.

Answering to the programmatic needs of the Brief, the whole building complex becomes the field for artistic creation under the general theme of death and rebirth of buildings. Departing from a deliberate position on not renewing the buildings or restore them to past splendor – a critical position towards a refurbishment attitude that aims to hide the years – a deeply philosophical debate is raised here, about the attitude towards the preservation and reflection on the future of the built environment. This also aims to challenge the community by showing the value of a completely distinct approach in a city where the tendency to preserve the past is deep-rooted.

It is critical of a “tabula rasa” approach; it reacts by finding a temporal niche in the history of the place. Harnessing the possibilities of the in-between time, a spectacle is made out of the decay of each of the buildings. It infuses a sense of guilt, as well a sense of grief for the characters that are called “Moribund buildings”. The emphasis is placed in the transition process rather than what will be the future architectural outcome, as an experience beyond the senses. It reflects over the creation of something new by consciously experiencing the tearing down of the physical objects. There is no doubt of the value of the existing buildings but by having one last epic moment, materialized in the so-called “Performances” – a demolition spectacle – where the presence of the buildings is transferred into the realm of memory. There is a glorification of the demolition as a liberating stage for the plot but also for the public, an “Architectural swansong”.

This script is imbued with a universal quality; it successfully broadens the discussion about the future of buildings, argument that is replicable in many places outside of the scope of this Competition.”

From the Jury: “The effort in providing a strong, simple concept was acknowledged and acclaimed by the Jury. It manages to solve many issues only with the introduction of one single element that pervades the whole situation in a unifying manner. This proposal was commended by the Jury as a splendid answer to the interests and requirements of the location and as a respectful approach towards the existing elements.

The buildings are linked by footbridges; a device which acts as a hybrid between architectural object and public space, in the way that it is a structural element that serves a dynamic function. This connection element at a higher level displaces the network of paths from the ground level and introduces a whole new set of experiences to the user, new viewpoints and perspectives over the buildings and the beach. The Bridge archetype is even more relevant in a city like Venice. The bridge theme acts a thread that connects all the buildings together, it positively links the activities, widens the array of activities and experiences for visitors. On the ground level, the public space treatment reacts to the existing context in order to create a new topography of ludic activities and functional elements. Interiorly in the buildings the strategy chosen was to void of all contents and treat each building as an open box, in order to host future activities and introduce a higher degree of flexibility without questioning the exterior identity and hierarchy of the buildings.

All in all, a sensitive answer to the needs of the Competition Brief with a substantial increment in the enrichment of the identity of the site by its richness of pathways and relation between buildings. This project, by its contained, rational approach of great effectiveness induces the conditions to a cultural rebirth of this sector of the island, as well as retrieves its importance in the context of the city.“

From the Jury: ” This project was acclaimed by the Jury as a harmonious, modest, lightweight intervention that successfully assimilates the natural invasion of recent past and tries to perform a similar intervention through architectural means.

Through a perceptive reading of the history of the location, this proposal comes as an evolution to reestablish the sense of community space. Originating from the existing elements, seen as a “harmonious ensemble”, there is a consideration of the history of the location and its successive alterations in order to host new functions and answer to different needs. This proposal adds successive elements in a way to restart the history that was halted in the past years. These new elements attempt to create an atmosphere of “stimulating dissonance”. This was read under the metaphor of a family to which a new generation is added. Sometimes the connection at first might not be clear, but in time, they all seem to find its respective place.

An abstract chess set is generated, in which all the buildings play a role in a rigid Cartesian grid, which makes a stage out of the overall concept. Populated by independent objects, the possibilities of public space appropriation are enlarged. The garden in the Public Space is treated as a backstage for shows and artistic interventions. They all perform together in order to bring people in through the variety of public space activities. It focuses also in the concept of incremental retrofits that relates sensibly to the needs of Association Teatro Marinoni.

All throughout the project an awareness of the history of the place is implicit as well as a position of respect for the present state of the buildings was felt. All added elements are designed to interfere as little as possible with the buildings, evidencing a character of conscious occupation as the main point in its strategy of rehabilitation.

A Total of five Honorable Mentions were selected by the Jury as representatives of some of the more prominent strategies as well as to signal the inherent value of their theoretical and spatial qualities.