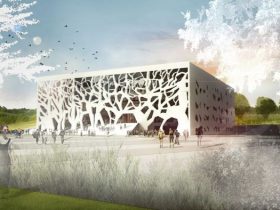 Lisbon Open Room (LOR)  is an Architecture competition for students and young graduates Hosted by ARCHmedium.

ARCHmedium has shared with us the results of Lisbon Open Room Competition. Let’s talk a little bit about the competition and the challenges before going to the results:

The competition departs from the socioeconomic context of southern Europe, more precisely from the delicate situation in Portugal. The country is rich in culture, architecture and history but the cuts policies have reduced the call to carry out public construction. It is even understood that despite unfavorable context, it has not been permitted to produce good architecture for the people, as the great school of Portuguese architects has always done.

ARCHmedium propose a unique piece of architecture, which is described as a large container of activities. Public investment is reduced to public equipment and the expense is optimized by hosting as many events and creating as many uses for the building as possible. It is a hall open to the citizens, activating the surrounding public space and articulating good architecture with limited resources. It is a container that aims to react to the magazine cover-like architecture that has been generated, instead relating to the historical context of the place, the socioeconomic conditions and the moral sustainability of the proposal. It is an architecture of values that seeks its referents in history, in vernacular architecture and in the Portuguese masters.

The jury has received all the work with a lot of gratitude. After having a face-to face meeting, the jury unanimously selected three proposals for the first, second and third places, as well as 10 non-hierarchical mentions.

A total of 166 Students proposals that were submitted, ARCHmedium have been announced the winners of the competition … Check out the winning entries of Lisbon Open Room Competition on the next pages:

Sensibility of the proposal regarding the pre-existing elements and a high level of complexity of how the elements are used and the limits are defined. A simple but effective gesture to incline the square changed the perception of space and emphasizes the cultural container.

The shadow on the square delimits the exhibition space. The proportion of the frieze acquires the scale of the place, so it does not compete with the monastery.

The architectural design of a suitable and suggestive analysis of the morphology of the historic buildings neighbors. By inserting a patio and a stylish twist plan, the proposal manages to save the distance between the viewpoint Square and the lower bound of the street. Good resolution of the pedestrian circulation and definition of service spaces.