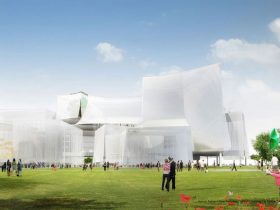 In a relatively small plot for the purpose intended, on the edge of a historic district on the coast of Lima, next to two heavily traveled highways of metropolitan scale, there is this collection of classrooms, workshops, laboratories, cultural center, administrative center, graduate school, parking space and service areas, shaping a new University Campus.

It is explicitly demanded a complex that, in addition to solving the functional interrelationships, offers an appropriate corporate image to the institution of national and international prominence which will host and give identity to: the most important private organization in the country engaged in higher technological education, being “avant-garde” and “sustainability” two of the essential concepts to be considered in a 3-phase development process to reach its maximum expansion.

Conceptualization and functionality:
Because of its location, its magnitude and its institutional character, the image of the complex becomes of vital importance. Thus, the proposal is resolved in accordance with a clearly defined identity through 3 main qualities:

1. The relationship with history: The ancient relationship of the pre-Hispanic architecture and the territory is the reference that has been taken. Thus, the foundation of the complex is resolved through its telluric nature, the management of an uneven plot, and the “manipulation” of the land, in order to generate the gaps and spatial sequences that will house the various activities. Architecture made in the soil itself and that will provide space for the University Cultural Center, facilitating its access and without compromising the other functions of the academic institution. In this case, the relationship with history is synthesized, in the first place, as the relationship with the ground.

2. The relationship with the urban environment and memory: The inevitable closeness to a wide variety of buildings that act as a simple city wall, and the dense and irregular network of low- and medium-height housing that flank our plot, make it a real island between both edges. An island of difficult access that continues to be a permanent visual reference due to its location. Therefore, considering also the high density established by the program, we propose the use of a green roof on the cultural center, thereby forming a new “University Park”, raised to improve its perspectives and as a place for resting, encountering, relaxing and distracting inside the complex. Complement and ideal get-together place between the cultural center and the university itself, linked also as a concept to the locally recognized and traditional “University Park” in the heart of the city, place originally associated with tranquility: an ideal place for relaxation of the students.

3. The relationship with the sky: A series of 6 buildings “floating” above the park, clearly organized into 2 groups of 3, is the powerful image of the whole. In fact, it is 2 buildings of 3 bodies each. They provide shade, organize the visual axes and perspectives, and mostly assume the leading role of what will be the state-of-the-art and high-technology institutional identity. The buildings, interconnected by a system of bridges, as well as waiting and seating areas, rise until cutting with their shapes the perspectives from the foundation, setting visual boundaries in an organized basis.

The complexity of the functions described completes its internal organization in the 3 bodies of each building, where the central body always operates as a server (stairs, lifts, toilets and offices) for the other two bodies, which essentially house the classrooms, laboratories and workshops. The whole is completed with an underground parking space for vehicles of all types.