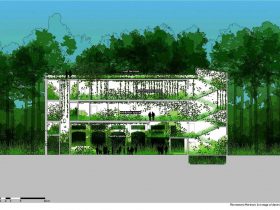 The Skywater Tower deals with issues of water production. While many countries already face the water crisis, Taiwan is ironically the second nation in terms of annual rainfall. However, the country’s steep topography leaves its tropical and subtropical zones surprisingly dry and with the soil unable to retain water. The shortage has become more severe in the last years, impacting individuals, agriculture and industries.

Drawing from a long tradition of researching water harvesting techniques, Atelier CMJN has designed an architectural object which also acts as an atmospheric water generator. The principle is the following: water vapor is condensed by cooling the air below its dew point or pressurizing it. Sun and/or wind are used to provide power for refrigeration. Refrigerated panels capture moisture. The verticality of the building enhances the ability to harvest more powerful winds in order to provide more water.

The new tower design is based on water production principles, but is also in line with Taiwanese cultural values. With its hydrodynamic shape, the structure is a landmark that contributes to its environment. The proposal envisions clusters of such water harvesting objects, optimally positioned within cities. They act as both urban attractors and plants, contributing to raising awareness about the water shortage issues.