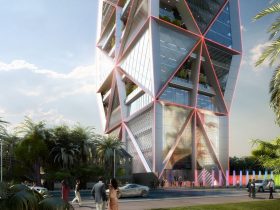 Eve Bailey‘s work is based on the concepts of balance and coordination. Her studio practice is rooted in the tradition of the artist engineer while extending to the disciplines of dance and acrobatics. The body interests her as a perceiving mechanical structure. she uses her own body as a primary tool to create pieces that experiment with equilibrium through physical, mechanical, plastic and conceptual means. she conceives functional devices that do not serve a practical purpose. Each project is developed through performances, drawings, maquettes, sculptures, photographs and videos.

Shoulder Path project concentrates on the form generated by a backward roll. The shapes of the structure fold and unfold recording the geometry of the successive positions of the action. Though created matter-of-factly, the sculpture develops its own gestural logic and resonance. for the photograph, ‘shoulder path-sequence’, bailey collaborated with anna finke, wardrobe supervisor of the merce cunningham dance company. The design of the costume focuses on the arrangement of the body throughout the movement. the solid orange color that covers the arm accentuates the center point of the rotation, while the blue stripes mark the rhythm of the different body’s alignments. The image is a visual compound of ideas about gravity, space, physical mechanic and its limits.

The work is on view in a two-person show september 1-15, 2011 at triangle arts gallery in new york, as well as a group show until september 29, 2011 at the hamilton and aronson galleries, university of the arts in philadelphia, pennsylvania.