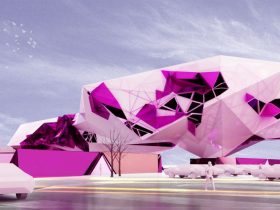 The winners of HMMD’s Red Square Tolerance Pavilion Architecture competition have been selected from over 120 submissions from architecture enthusiasts from around the world. The competition challenged participants to design a temporary pavilion for the education of social, political and religious tolerance, to be erected in Russia’s Red Square, Moscow.

The quality of the submissions was extremely high and the winners were chosen for the strength of their concept, originality, quality of their presentation and, most importantly, political and social influence of their design. The judges placed a particular focus on each project’s concept and its respective ability to manifest the idea of tolerance and leave a strong impact on this politically-charged site. HMMD would like to thank all the entrants who took part and are extremely proud of the winning designs.

The three winning concepts came from design teams based in Italy, Norway and France respectively, showing how the theme of tolerance is important and relevant in countries spanning the globe and that world-class design is universal.

Details: This project, although seemingly quite simple, carries great potential to spread the message of tolerance. The choice to move the structure away from the center of the square is a strong one, and its location against the Kremlin Wall speaks powerfully. In the space created by this project, visitors are forced to confront the wall’s darker past as they are educated about a tolerant future, thus creating a powerful dichotomy. Throughout the project, there are also a series of framed views from the structure, and even the subtle incline of the facade speaks metaphorically of inviting the public inside. The full transparency within the space, even down to the chosen stair details of transparent treads and risers, continues this idea of welcoming and acceptance. The choice of a white facade in direct contrast to the red brick wall behind is also one that speaks of peace, forgiveness, and hope.
As a temporary pavilion, the removal of this intervention could also be politically charged, as the lack of weathering behind this facade would leave a physical imprint on the wall. This would continue to remind visitors of the power of tolerance, thus embodying the enduring social and political footprint that this competition seeks.

Finally, the provocative ideas put forth in the concept and design of this project are followed elegantly with a presentation that clearly illustrates the desired juxtaposition between the tyranny of the wall and the pure hope for a tolerant future. This is most clearly illustrated with the elevation rendering, which illustrates a glowing white beacon triumphing over a totalitarian past.

Details: This project features a series of clever solutions to engaging and sharing the subject of tolerance. The choice to position the pavilion so that it crosses the entire width of the square is successful in its utilitarian nature of intercepting all visitors crossing the square. In this same position it is also forming a metaphorical blockade against the military routes outlined in the paving of the square. The slightly voyeuristic nature of the concept is also provocative in the manner that everyone in the square becomes a participant in educating the public about tolerance. Through many plied layers of colored glass, one’s view of the passersby in the square is reduced to a series of silhouettes, which poetically alludes to the fact that without the pretense of our own prejudices (i.e. a clear view of another human being that we can judge), we are all equal.

Aside from the strong and clear ideas incorporated into this project, the presentation itself is equally powerful in its clarity and simplicity. Of particular note is the eloquence of the narrative on the first board, which the judges found to be at the heart of the idea of the competition.

Additional noteworthy details reveal themselves as one realizes, for example, that the image on the first board is illustrating a red square, and is yet in philosophical contrast to the Red Square competition site itself. The project is successful in clearly illustrating an idea that directly confronts intolerance – that everything is not always as it seems – and that it is only through understanding and acceptance that we can embrace tolerance.

Details: This project exhibits a straightforward concept that is presented very clearly and represented beautifully. The idea of folding or twisting together various minority groups is quite unique and manifests itself well architecturally. Additionally, the programmatic planning of the pavilion has a refreshing clarity – showing a somewhat religious ascension towards a tolerant enlightenment. Each of the petals contains a different gallery, and as they each fold into each other they reveal a sequence of experiences that culminates in a common central space for gathering and exchanging ideas. The unspoken metaphor of a flower is also present, which sets a tone of growth and beauty.

The contrast between the materiality of this pavilion and the rest of the square, namely the Kremlin Wall, brings a subtle poetry to the scheme. The key image of the presentation shows a series of translucent petals lifting into the air in contrast to the weight of its monolithic red neighbor, which further reinforces the concept of a welcoming and tolerant space that stands directly in front of, and in direct contrast to, the Kremlin Wall.

The presentation itself is also particularly noteworthy, and included some of the highest quality images amongst the entries. These images are successful in conveying how a series of simple architectural moves can successfully set the scene for a didactic and tolerant environment.