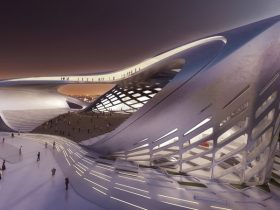 The winners of HMMD’s Triple Bridge Waterfront Architecture Competition have been selected! The competition to create ideas for the proposed development along the Liepaja Canal has produced some amazing designs, and the winners have successfully combined their ideas in a contemporary and historical setting. Of the projects submitted, the winning three designs were chosen for their clarity of vision and their ability to unify a diverse program and expansive site. The jury also considered each design’s potential to act as a phased development and provide an experiential attraction for locals visitors and tourists. As always, HMMD participants were from all over the world, and the three winning projects selected were all from different countries; our 1st place winners hailing from China and our 2nd and 3rd place winners from the United States and Germany respectively.

The winning entry is differentiated by clarity of organization and singularity of form. The proposal is characterized by a single datum responsible for structuring program, site, and public experience. Analogized to a table, this datum establishes relationships between regularly distributed, formal and informal functions — on top of, below, and around itself. Bounded by the street and waterfront, the table establishes a line against which the city and waterfront are measured. Altogether, the solution is comprehensive, systematic, and radically straightforward.

Program prescribed in the brief is articulated through legible geometric forms, regularly set across the table. The space between allows for flexible, incidental activity. It is perhaps within these spaces that the proposal is most profound. Sectioned between formal geometry and function, the space between allows for provisional public, and for that matter private use — civic, commercial, intimate, social, or recreational — with little to no obstruction. Elevated above the table, the space serves as a public terrace; and below as an open, shaded lawn. The solution is flexible for both permanent and temporary use. In a similar way, the project is structured to be phased over time across the site, from one pavilion to another. As with the additional leafs of an expandable table, the proposal can further expand as required.

The promise in the second place entry is twofold. First in the use of the arch as a versatile, systematic, and monumental form for organizing public space. The material system of the arch is flexible. It can be rendered as a heavy mass or a light frame, as both an enclosed or open space. The arch way defines space linearly as a barrel vault, at intersections as a groin vault. In each case, though, it maintains formal autonomy. The versatility within this system organizes the site for diverse public functions, adapting material and enclosure as required.

Within monumentally defined spaces, the proposal imagines intimate, almost domestic activities, responsive most directly to the human scale. The restaurant for example is conceived as a dining room, described as an outdoor space covered by suggested enclosure through a wireframe structure. The space is distinguished by a domestic dining room table,stretched in length to fit exceptionally more people. The placement of what would normally be thought of as accoutrements for domestic and private activity, with noninstitutional programs in such monumental forms results in the monumentalization of intimate social activity. In effect, the proposal personalizes public space.

The third place project unifies the diverse forces of the site through programmed landscape. The project employs a clear design strategy mediating between the formal fabric of the city and informal edge of the waterfront. This is accomplished through pairing and juxtaposing of two distinct typologies: the civic plaza and recreational park.

The civic plaza is traditionally hardscaped and monumental, while the recreational park tends to be soft scaped and informal. The civic plaza is strategically set at the edge of the site, adjacent to the flanking street and city edge, while the civic park emerges from natural slope rising from the waterfront. The plaza and park are stitched by the required public program between them. The result is a programmed landscape blending the fabric of the city and the water. A hybrid of otherwise traditional public space typologies.