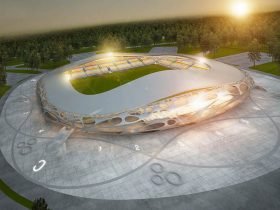 Beyond the motive of implementing  the Oenothera Bridge by Marius Cernica, is to enrich the presence of a new sculpture in the old European context which is not far from the historic center of Vienna.

The proposed sculpture  Oenothera Bridge draws a new contemporary iconic bridge and is formed by a series of arcs that cross the channel from one side to another sculpting the global form, connecting between them at specific points.

Each arc of the Oenothera Bridge is designed to be composed of several prefabricated concrete sections which are then assembled at the construction site. To cover a span of about 30 meters of the sculpture design, the arches have a height of about 80 centimeters in sections at the base, where the forces reach the utmost values ​​and about 30 cm sections of the middle part, where the compression forces are at its lower values.

The metal  Oenothera Bridge sculpture that supports and gives the final form to the bridge, is hung to the elements above, the fixed points around the sculptured bridge are those that affect the supporting arches above and the two sides that make up, in the formal continuity that distinguishes the project, the end surfaces decking and railings.