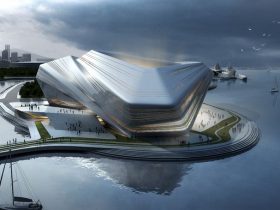 The Michael Schumacher Developed as a prototypical design translating brand values into iconic architecture, Snowflake Tower is the first in a series of towers located at strategically chosen locations around the world.

The tower marks a departure from traditional architectural thinking. Design takes the initiative.

Inspired by the geometrical order of a snowflake and the aerodynamics of a Formula 1 racing car, the tower encapsulates speed, fluid dynamics, future technology and natural patterns of organisation. Rather than purely mimicking shapes in nature LAVA has learned from nature’s own geometrical orders creating highly efficient structures and intriguing spaces.

The organisational principle of a minimal surface allowed the optimisation the facade/floor area ratio and each apartment in the 59-storey luxury tower has unobstructed ocean views. With intelligent systems and skins, the tower can react to the external influences such as air-pressure, temperature, humidity, solar radiation and pollution. New materials and technology will create robust, lightweight structures capable of adapting to, and harmonising with, the natural surroundings. The design principle is adapted for each location generating a mix of local and global values.