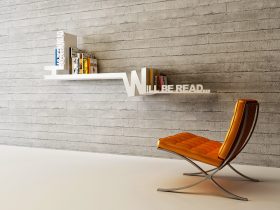 23 Artistic Bookshelf Designs That Will Make Your House Awesome

Lullock: A chaise Lounge that responds to the natural movement of the user.

The arched base is designed to roll smoothly, adjusting to the user’s transition between front and back as they shift their weight. Users can also position themselves upright on the chaise, allowing them to explore a different rocking motion.

The bubbly green Mushrooms squish and mould to support each individual body shape. This creates a warm comforting sensation as the person nestles safely inside Lullock.

Not only does it help alleviate stress by cradling the body but the playful rocking element also encourages people to move about.

This promotes an increase in oxygen and good blood flow which is good for when someone is occupied with a stationery activity for extended periods of time.

Lullock is perfect for reading. using a digital device, or simply relaxing in the privacy of the curved form.

Various foams and felts were experimented with during the testing phase of making the mushroom forms.

Ideally the final material used would be purely felt but because the thicker felt was too dense and firm, it did not offer the same soft comforting experience like the feel of the scale model.

Therefore we decided to use a combination of foam. for its squishy properties, and felt, for a soft exterior surface.

We found that the green foam was less dense, easier to cut and cheaper than the blue foam so decided to go with this option which also influenced the color of the final form.We also tried the thinner felt by itself, doubled over for added thickness but it didn’t tend to hold its shape as well as the foam-felt combination.

August 18, 2021
Load More
Join our Newsletter
Start receiving our content monthly in your email.
Give it a try, you can unsubscribe anytime.