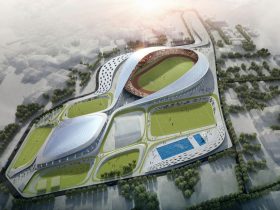 In Stratford, East London forms a key legacy of the London 2012 Olympic Games. With a capacity of 20,000 spectators during the Games, the two 50m swimming pools and 25m diving pool will be turned into a 3,500 capacity after the Games, forming the British capital’s leading facility for aquatic sports. more information below:

Design Concept
The architectural concept of the London Aquatic Centre is inspired by the fluid geometry of water in motion, creating spaces and a surrounding environment in sympathy with the river landscape of the Olympic Park. An undulating roof sweeps up from the ground as a wave – enclosing the pools of the Centre with its unifying gesture of fluidity, whilst also describing the volume of the swimming and diving pools. The London Aquatic Centre is designed to have the flexibility to accommodate the size and capacity of the London 2012 Olympic Games whilst also providing the optimum size and capacity for use in Legacy mode after the 2012 Games.