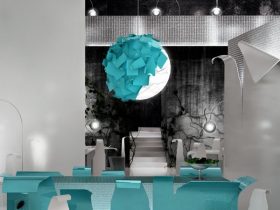 The Bulgari Pavilion b.lounge was a temporary installation commissioned by prestigious luxury jewellery brand Bulgari for Abu Dhabi Art 2012, held at Saadiyat al Manarat Abu Dhabi, UAE, open from the 5th November until the 10th November.  The project was required to be both representative of Bulgari’s style and its creative ideologies, whilst being emblematic of a “modern mythology”.

Concept and Design
The reappreciation of something mundane and transforming it into something magnificent became the starting point for our design concept. The design of the Bulgari Pavilion aimed to be both reminiscent of Bulgari’s Italian heritage whilst being representative of its own fabrication and structure. In this sense a certain brutal honesty was desired it the final outcome so that the form was a self supporting entity in itself without the need for a separate internal structure; therefore the form was not merely a decorative veil.

After a period of extensive prototyping and experimenting a design based upon the packing of acrylic tubes was devised. Acrylic tubes are an “off-the-self” product that come in set lengths and diameters. Although they have a diverse range of uses they are rarely used as principal architectural elements. By packing them close together not only do they begin to form mass but also provide structural rigidity. Much like the rough gemstone the concept was to slice and cut, smooth and polish the form to result in new spaces and environmental conditions, to reinvent the material as something extraordinary and unique.

Whilst attempting to create a wholly new spatial experience the team were also keen for it to simultaneously be something completely familiar, evocative of Bulgari’s heritage. In this way it was decided to form arches, arcades and cupolas through the excavation and sculpting. As well as being exposed and translucent this method provided a recognisable enclosure and intimacy all be it an ethereal sensation of it.

Continuing with the desire to create a holistic design, a bespoke connection technique was formulated using polycarbonte dowels secured with polycarbonate pins. This provide not only a quick and simple assembly method but also minimised the impact the connections had aesthetically unifying the design through a single material.

In total the design consists of 2272 tubes with approximately 10,000 individual connections between them with a final weight of nearly 6 tonnes. In parallel a team from Artisan (United Visual Artists) worked on the lighting design for the project.