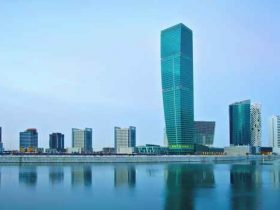 A proposal for a new Bolong 3D Movie Museum & Mediatek sited in Tianjin, in northern China.

China has in recent years become the second largest producer and consumer of movies. With this as a starting point, the Bolong 3D Movie Museum and Mediatek is imagined as the cornerstone of a new media park in Tianjin.

The building design takes it inspiration from the clouds, emphasizing ideas of creativity and inspiration.

Each of the buildings programs is encapsulated in its own sphere, creating a series of unique spatial experiences as visitors move through the building. Entering the lobby, visitors are asked to explore the interior universe via series of different public paths, each offering its own unique way of exploring the building.

The Bolong 3D museum offers state of the art projection capabilities mixed with playful and engaging architectural design. The building will serve as the pivot point for the new Bolong Film Festival as well as house the James Cameron Avatar Experience Center.

“With the proposal for the Bolong Mediatek we wanted to create a building that directly reflects new movie technologies. Through interactive surfaces and an expressive, bubbling, interior the building provides an immersive experience as rich as the 3D media it is built for”.

Founded by Danish architect Jens Holm in 2010, HAO is a multidisciplinary office that works in the fields of architecture, art and design with a focus on creating socially engaging projects and spaces that can accommodate diverse programming.

HAO is currently working in the US, China, and Europe on projects ranging in scale from art installations to master planning.

HAO recently won competitions to design the Samaranch Memorial Museum, the Qingdao Master Plan and the Binhai Eco City as well as the re-design the Coleman Oval Park and Skate Park in New York City.

Prior to founding HAO, Jens worked for several years as a lead architect with Rem Koolhaas and OMA / AMO in OMA’s Rotterdam and New York offices and as an associate with Rockwell Group Architecture, Planning and Design in New York.

Jens was born in Denmark and holds a Master of Art and Architecture from the Aarhus School of Architecture.