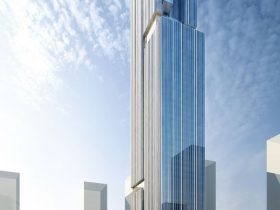 Designed by Andrew Bromberg Architect at Aedas, Gemdale Changshou Road project is located within the inner ring of Shanghai urban city, near the historic Changde Road with close proximity to two metro stations and a planned future green area in the residential zone on the south. The 45,000-square-metre project consists of an office tower and a retail podium. The project had an interesting challenge as a bridge between the low-rise, residential developments to the south and Changshou Road to the north.

The retail steps away from the tower setback to the property edge, with lush terraces as an extension of the green park to the south. Entrances for the retail are visible at both ends facing the busy pedestrian junctions and connecting the two metro station entrances. The lower portion is highly accessible bringing a missing ‘humanism’ to the urban fabric. The tower itself was deliberately ambiguous with the soft forms dissolving into both the surroundings and the sky above. Its form, articulation, and softness were considered to allow the tower to float above the green terraces of the retail below as a ‘cloud’ may sit on the hill.

The tower’s placement and angular orientation is a deliberate result of optimising open views, creating a visible form along Changshou Road. To further direct the building’s energy towards this important main street, the curtain wall façade of the front face gently ripple towards the top further dissolving the expression by softening the reflections of the surroundings. A recessed ‘cave’ below breaks down the mass to a pedestrian scale and allows the terraces below to dissolve up into the tower. Tight horizontal extrusions open up towards the South as sunshades, reducing solar gain into office floors. Glass curtain wall uses high-performance, energy-saving, low-e, low-iron glass. The natural landscaping on podium terrace balconies also reduces solar gain into the project by maximising the green on site in a naturally-ventilated environment.

Thanks for visiting! If you like Aedas’s Gemdale Changshou Road architecture project, You can share it with your friends! Also follow us for more contemporary architecture design projects from China.