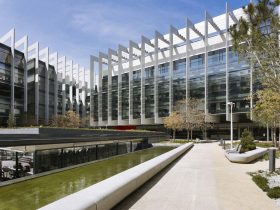 The World Post, the international partner of the Huffington Post, ranked Zaha Hadid at number 26 on its list of Global Thought Leaders 2015 – one of only 12 women to make the list. The list, compiled by the Gottlieb Duttweiler Institute (GDI) and The World Post, in conjunction with Peter Gloor, a research at the Massachusetts Institute of Technology, identifies the most important pacemakers of global conversation and their prominence and influence within world-wide networks such as Twitter, Wikipedia, and blogs.

Dame Zaha Hadid (born October 31, 1950, Baghdad, Iraq), After graduating from the Architectural Association in 1977, she joined her former professors, Rem Koolhaas and Elia Zenghelis, at OMA. In 1979 she established her own studio – Zaha Hadid Architects – which she runs with office partner Patrik Schumacher.

Her buildings are distinctively Neofuturistic, characterised by the “powerful, curving forms of her elongated structures” with “multiple perspective points and fragmented geometry to evoke the chaos of modern life”. She is currently professor at the University of Applied Arts Vienna in Austria.