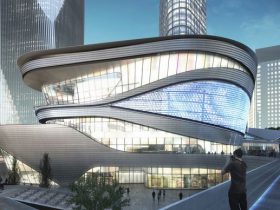 Zhongxun Times in China by 10 Design

Zaha Hadid has been chosen to design the new £630-million Iraqi Parliament Building in Baghdad.

The Iraqi-born Starchitect Zaha Hadid landed the project despite coming third in a design contest for the prestigious building, which was won by London-based Assemblage.

It is understood Zaha Hadid Architects (ZHA) has been working on the project since at least the start of this year, although no official announcement has been made by the country’s government.

The high-profile practice is already designing the towering Central Bank of Iraq and is also rumoured to have been approached to design a new Iraq National Museum. The 63-year old Dame was born in Baghdad but has not visited the country in more than 30 years, according to Bloomberg. Her father, Mohammed Hadid, was leader of the opposition National Democratic Party in the 1950s.

Hadid was placed third in a RIBA-run design contest for the new seat of government with a design –as yet unrevealed – inspired by the eroded mountains surrounding the River Euphrates.

Controversy arose after it emerged the competition client was still in discussions with ZHA shortly after the winning teams were announced. A competition pledge to exhibit the winning schemes has also been abandoned.

In January, ZHA told The Guardian it had been invited by the client to address technical queries in the summer of 2012 and had been informed ‘the competition rules allow for any of the submitted design proposals to be selected for construction, irrespective of placement in the competition’.

The practice declined to comment on the latest rumours but Assemblage and Capita Symonds – which was placed second – both confirmed they had not been contacted by the client since the competition’s conclusion.

Competition judge and former RIBA president Sunand Prasad said: ‘Obviously we selected a winner, therefore we would like to have seen it [design the building] but the client reserved the right to pick any of the top three and they have gone ahead and done that.’

He added: ‘I really regret that the exhibition, discussion and publication of the designs hasn’t happened and I would urge those involved to do it.’

Peter Besley – whose practice Assemblage received £160,000 for the top prize – commented: ‘Given what happened in Cardiff, [where ZHA’s competition-winning opera house was abandoned] people are very surprised Zaha did not step aside.

‘We are disappointed, but have moved on to other things.’

The £630 million building will be built on a 20 hectare site in West Baghdad, which was originally used by Saddam Hussein to partially construct a super mosque. Situated in the heart of the city, the Iraqi government hopes the new building will be a “more potent symbol of the new Iraq.” Details of the design have yet to be released.