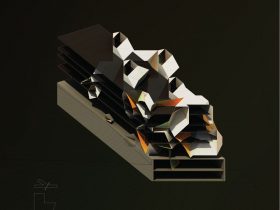 Kinetic Architecture & Organic concept for a Safe house of the Future

Isn’t the Wizard of Oz a clear example of the awesome force that a tornado can muster? How can Jaws drive people out of the ocean screaming when a house blown through the sky brings back nostalgic memories? Please stay out of the water… but feel free to build your home below flood level and out of cards in the wind. There is an urgent need to shift from an outmoded logic, ignorant of the forces of nature, to a point where the unabashed rush for profit and development can be balanced against the basic goal of providing shelter. Humanity is inexplicably driven to build in places where it should not-accepting the unavoidability of this folly is the first step to breathing in a new vision. We sought a way of turning the seemingly destructive acts of nature into creative blooms.

Kinetic architecture is the innovation which we believe will form the foundation for the habitation of the future. This type of architecture learns from technological innovation and amps up its incorporation into the home, custom tailoring existing mechanisms in new ways. The revised conception of the home finds itself somewhere between garage doors, flowers, and the survival mentality of a turtle. A series of simple hydraulic levers are used to push the home in and out of the ground and deflect and warp the outer skin in response to external stimulation. The key activators of this motion being the high velocity winds associated with thunderstorms and tornadoes. A series of solar cells on the outer skin rotate and flex to attain maximum solar intensity. A translucent outer skin consisting of clear insulation sandwiched between two layers of Kevlar provides the weather barrier and lets diffuse light into the structure. We are also exploring the application of photocatalytic coatings and carbon nanotubes on the skin to absorb and clean pollution turning it directly into fuel for the home to power the hydraulics.

A water tight seal locks the roof of the collapsed home making the structure water and wind proof. There have been a series of studies since the mid 90’s showing homes that float up and out of harm’s way. This solution does not anticipate the velocity of the water, and more importantly the grinding power of the debris contained in the water. The safest place is down.

Neighborhoods will become interwoven and connected together through sensor networks that interpret weather data. After warning sirens entire suburbs can be collapsed in seconds. The whole neighborhood will behave as an organism fit for a collective response to the challenges brought by the natural environment. The image of technology as a fire breathing train slicing a trail of black smoke through the innocent forest painted by Hawthorne is slowly replaced by a desire to respond to nature and not seek to dominate it. The tornadoes and storms can burn and blow with all their fury while the suburb safely sleeps.

Can we spin this violent ever present soup into a stabilizing direction? We seek a new mobility for the home that is controlled not left to “chance” (there is nothing accidental about 100 year old weather patterns). We are currently working on the development of a prototype with a group of ship builders in the US and Africa.