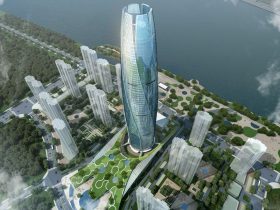 The vitality of Shenzhen depends on the strong capacity of innovation and absorption. In the future, Center of the Shenzhen Bay Biomimic “Super City” will be built 150-170 million square meters, in which about 6-7 million people will work. In this case, could we make a different imagination to meet the requirements of the development sustainable of the future?

With the issue, turning to history, we found a comic skyscraper in New York in 1909, in the skyscraper, people want reproduce everything on the ground: each floor has its own land and sky. This prompts us to conceive a city in the air that needs urban space and big green garden. The imagination utopian maybe brings something for the future skyscraper in Shenzhen.

The project integrates the different urban spaces and creates a unique form in respecting height limit of city planning. We space several horizontal ring-like volumes superimposed with the large circle green gardens in the air (30-50 meters high and up to 1200 meters the perimeter). The annular volumes form a huge city atrium. The openings of different sizes bring the air and light into the Shenzhen Bay City atrium.

In organizing the circulations of the Shenzhen Bay Biomimic Superposed City, we establish a vertical public traffic system: people can take a kind of “vertical bus” (huge lift cage with three levels) that connecting the subway to reach the middle and top garden in the air, and then transfer the internal elevators to each level of building.

In differing from traditional mode of produce and consumption of energy, the Shenzhen Bay Biomimic Superposed City itself will be a generator. There is a huge energy body in the air, it contains an inexhaustible supply of energy and water, wind and solar omnipresent.
In the Shenzhen Bay Biomimic Superposed City, the epidermis of construction is the ideal place to generate clean energy. Wind power generation device (wind belt generator) and photovoltaic power generation device are scattered on the epidermis, in absorbing maximally the environmental energy.

The Superposed City can self-suffice for its power consumption. With the development of technology, the rate of energy conversion will be greatly improved. In the future, it will provide the power to the nearby urban area, in playing an important role: generator of city. In the Shenzhen Bay Biomimic Superposed City, the rainwater and water in the air can be collected and recycled.

The space design of the city brings itself into a huge air conditioning device. It provides natural ventilation suitable to inter spaces to make it less dependent on the air conditioning equipment, thereby reducing energy consumption. The air convection will be produced naturally by the height of huge City atrium and the difference of temperature inside and outside of city. In adjusting and filtering the air, the green gardens in the air can control the air temperature, humidity, cleanliness and wind speed and form a comfortable outdoor environment.