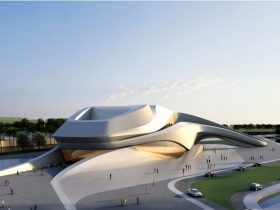 The Sheikh Zayed Bridge has been awarded ‘Best Bridge’ by Travel + Leisure Magazine in their Design Awards 2012. The annual Design Awards recognize the best worldwide design, judged by a panel of distinguished professionals and industry experts. Zaha Hadid Architects will receive the award on 07 March at the Travel + Leisure 2012 Design Awards in Berlin
http://www.travelandleisure.com/articles/tl-design-awards/7

Abu Dhabi Municipality was also awarded the International Road Federation’s (IRF) Global Road Achievement Award for Design for the  Sheikh Zayed Bridge. The 2011 Global Road Achievement Awards identify and honour excellence, innovation, and exceptional achievements in 12 key categories in the transport and infrastructure industry. The Abu Dhabi Municipality received the award at a ceremony in Washingtion DC on 24 January.

“The  Sheikh Zayed Bridge is a masterpiece of architecture, of extreme beauty and unique design” said Engineer Abdullah Al Shamsi, Acting Executive Director of Roads, Municipal Infrastructure and Assets Sector at the Municipality of Abu Dhabi City. “Winning the GRAA for Design has been achieved thanks to the fulfilment of a host of standards most important of which are the degree of complexity, ability to innovate, cost and efficiency considerations”
http://irfnews.org/awards/current-winners

The Sheikh Zayed Bridge was inaugurated in November 2010 by His Highness Sheikh Khalifa bin Zayed Al Nahyan, President of the UAE and and His Highness General Sheikh Mohamed bin Zayed Al Nahyan, Crown Prince of Abu Dhabi. The bridge is considered a towering national achievement and has since become an important landmark. The eight-lane bridge serves as the gateway to the city and is an integral element within Abu Dhabi’s 30-year masterplan. The 842-meter bridge connects Abu Dhabi Island with the mainland and is designed for 16,000 vehicles per hour. It also includes a pedestrian footway and road shoulder in each direction. The bridge’s main arch rises 64 metres above sea level. The unique design reflects the asymmetric arch shapes of sand dunes; it’s elegant sinusoidal structural silhouette is instantly recognizable. Steel arches rise asymmetrically from concrete piers and are inclined at angles that increase with their distance from the bridge’s central spine.