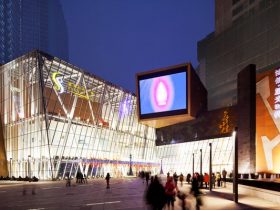 Rolling Homes is a new vision for establishing striking and astonishing home units especially for living, vacations or even spending some reminiscent moments with the family in the city of Svencele, Lithuania.

The architects proposed here a collection of rounded houses to be effective and cheerful place of living with wide panorama which ensure continuity between the in and out of the unit (between the nature and the occupant), as well as the aesthetic factor, the furnishing to be well equipped as it will be convenience for a high-life modern style.

The Rolling Homes acting as a dynamic & playful environment and also destined to be progressive and dynamically viable for either a single bachelors or a family.

The remarkable exterior shape for each one of the units, giving wide range of both simplicity & modernity as a lifestyle, in addition to its functionality.

From one hand, the plans of the Rolling Homes embracing the physical effect on three levels of well accommodated layouts, the glazed façade of the units are allowing to maximize the lighting permeability of the unit’s interior for more ventilation and sunlight flow by broadening the area of the glazing in the façade for each one of the units.

On other hand, the visual effect of the façade will keep the connectivity relationship between the occupants and the nature more coherent and not interrupted, while the sides of the unit acting as a collar which maintains the privacy between neighbors as well as the main structure of the unit itself.

All facilities, tools & technology are required for a high-life and exclusive modern style are provided and fully equipped in the eye-catching Rolling Homes in which they are melted with their astonishing and marvelous natural location to create a charming place for living in.