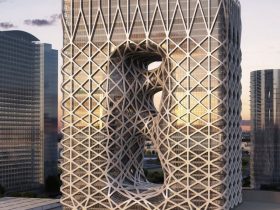 The design of the Pushkinsky Cinema facade renovation places the face of the landmark venue behind a sculptural veil which acts as a dramatic backdrop to Pushkin Square and an iconic face to the cinema. Inspired by the screened views, geometric intricacy and flowing surfaces of a “Russian Veil”, the design contrasts the imposing presence of the Brutalist architectural icon by simultaneously enclosing and revealing its contents behind a delicate yet robust open air lattice materialized as thermo-formed sheets of DuPont Corian. The solid mass of the building is clad in a series of Corian panels which gently morph the relentless diagrid pattern of the existing facade into a flowing and varied matrix of warped hexagon modules.

The composite effect of the varied orientations of the hexagonal screen components creates a rich and dramatic moiré effect which dissolves from opaque to transparent and back again as one moves around, through and within the building. With each step the building appears to change through the interplay of light, shadow, and visual connectivity as the thin 13mm thick Corian sheets nearly disappear upon perpendicular viewing while those at oblique angles to the viewer are revealed through their 500mm depth. This dynamic effect encourages visual interaction and connectivity between the cinema and Pushkin Square by simultaneously revealing and concealing the contents of the cinema through a multiplicity of varying and directed views into and out of the lobby.

In addition to its stunning visual performance, the screen wall also acts as a brise-soleil providing solar shading to protect the clear glazed lobby, while providing for ample opportunities for indirect day lighting. As the geometry evolves from diagrid to hex, subtle shifts in rotation, scale, and connectivity occur which further articulate the pattern to include varying densities and orientations of the apertures in response to annual solar incidence on the facade surface. Greater density is achieved where required, and greater transparency where it is not necessary. This gradient of articulation results in a spectacular dappled shading effect mirroring the visual moiré.