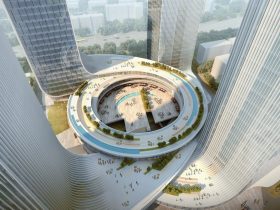 Parinee I Tower will be located in the heart of Mumbai, facilitating a wide range of businesses, including the India movie industry. To accentuate the inspirational references, the building facades are installed with LED screens for film and graphic projections.

The concept of the building is derived from the movie industry, assuming a futuristic appearance and dominating the city skyline. The metallic folding wall design of the lobby is inspired by imaginative sci-fi movie setting. The red LED light fills the lobby with energy. This vigorous form floating above the office floors on the top is an auditorium and restaurant space dedicated to the celebrities. The flexibility of the space can cater for activities such as premieres and private party. The west facing facade of auditorium is installed with large glazing which offers the guests a chance to look at the breathtaking view of Mumbai.

Integration is an important factor in movie production and creative industries. The facade design of Parinee Tower is an integration of four different facade zones which offer diverse spatial experiences from both inside and outside. A unique combination of glazing, LED, louver and sky garden zones create a unique and iconic building profile.