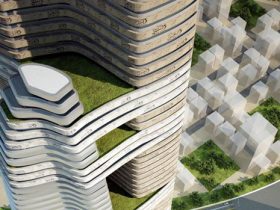 Oxymoron is a research thesis in the field of computational aesthetics through the application of topology optimization strategies for a skyscraper design in Shenzhen (China); the figure of speech that combines contradictory terms better describes the thesis subject: the erosion, a sort of creative destruction, the construction of space through matter subtraction.

The whole design process, from ideation to engineering, orbits around the Soft Kill Option (SKO), a mathematical method used to search the optimum structure topology in given conditions. The process allows to understand and build simulation models of (usually stress based) energy distribution in dynamically balanced systems like the ones visible in nature, such as tafoni: a formation phenomenon driven by the erosion action and patterns of salts crystallization inside the rock in which cavity proliferation is related to the more porous lithological areas exposed to external agents. The heterogeneous nature of the material and the cyclic rhythm of erosion define the surface and cavity patterns, with subsystems dating back to several ages recognizable by boundary extension and cavity depth.

Differently from its usual application method, SKO was not used in a reductive approach, that is as a problem-solving search algorithm within a precisely predefined boundary condition in search of an “optimum” structure; rather, the SKO potential and embedded rationality has instead been exploited as a device to map the territory of aesthetic. Analyzing the intricate spatial relation formed by cavities and interruptions generating a topologically consistent and connected morphologic panorama the goal is to apply such complex and multilayered coherence to the architectural scale for the creation of redundant, opulent and intricate outcomes in order to investigate their aesthetic qualities and potential.

The nonlinear nature of the topology optimization process does not allow predictions on morphology and behavior given the initial conditions, but its convergence enables the recording of results to build catalogs and trace possible behavioral patterns and tendencies.

Starting from simple benchmarks on a regular block volume in order to map and document morphology effects such as heterogeneity, variation, redundancy the iterative process was then coupled with known rules for tower structural design (such as tapering to improve stability and wind resistance) to inform the bounding volume as well as the exogenous forces and constraints.

The iso-condition property of generating nested and non intersecting multilayered topologies enabled and eased the design of coherent and consistent hierarchies of systems and subsystems of structure, space, circulation and the recursive skin pattern.