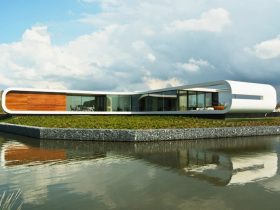 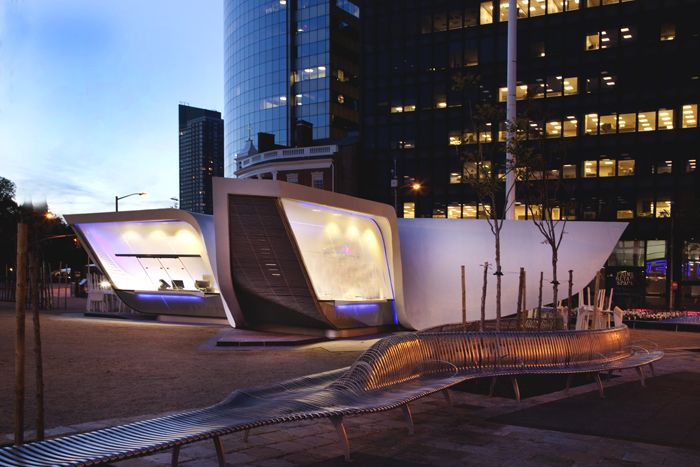 On May 12th, 2011, the official opening of the Peter Minuit Plaza and the dedication of the New Amsterdam Plein & Pavilion took place in Battery Park, New York.

Welcoming 150,000+ Daily Visitors, Plaza Features Pavilion Designed by UNStudio, A Permanent Gift from the Kingdom of the Netherlands to New York City. The ceremony was held at 10:30AM (EST) in Peter Minuit Plaza, and was attended by American and Dutch dignitaries, civic and business leaders, and key representatives of New York City’s cultural and arts community.

This highly sculptural pavilion stands as a gateway to the Battery’s park and waterfront, with an expressive, undulating roofline and curving walls;  a compact little building with the authority of a  major landmark, evoking a flower opening to its surroundings.

Commissioned by The Battery Conservancy and developed in collaboration with the Parks Department and Department of Transportation, the New Amsterdam Plein & Pavilion was made possible by a generous $2.3 million gift from the Kingdom of the Netherlands to New York City, in honor of four centuries of friendship and a mutual passion for the values of innovation and creativity, diversity and openness, entrepreneurship and progress.  The site will be New York City’s first true 21st century intermodal transportation hub – where bicycles, buses, the subway and water transportation intersect with cultural offerings in a singular expression of daring but lyrical design – and will convert an intersection traveled by more than 150,000 residents and visitors daily into Lower Manhattan’s newest and most dynamic destination for cultural activity, entertainment, and enjoyment. 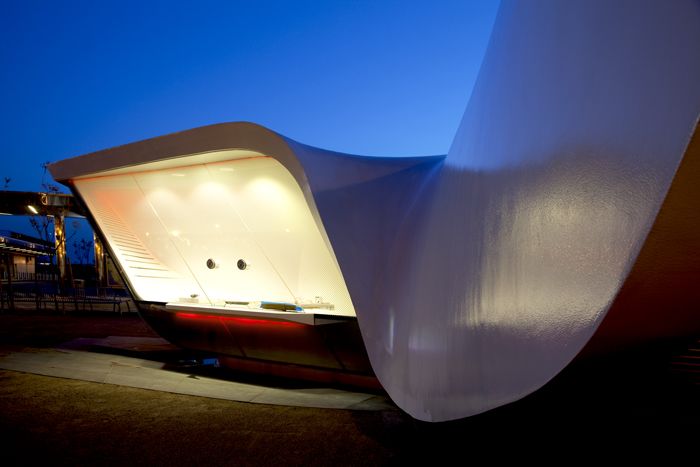 Every night at 12:00AM midnight, the New Amsterdam Pavilion will glow with an array of colors in tribute to Peter Minuit whose name translates to ‘midnight’. 1626 consolidated the early settlements at the tip of Manhattan: a grouping that came to be known as New Amsterdam. This destination is, in the words of architect Ben van Berkel, “the ideal site for a permanent commemoration of 400 years of Dutch history in New York, because it is steeped in a sense of a shared past and looks directly toward the harbor where Henry Hudson sailed, but is also entirely focused on the future by virtue of its role as a modern transportation hub within the constantly changing scene of Lower Manhattan. This is a site where history meets the future.”

Warrie Price of The Battery Conservancy said, “The Netherlands is a country that sets global standards for how cities and countries can regenerate themselves through the professional strength of innovative and talented designers, and through the force and beauty of the natural world. The Battery, where New York City was born, began its own revitalization with the work of famed Dutch garden designer Piet Oudolf, who created with us the largest perennial gardens in North America, free and open to the public. With the New Amsterdam Plein & Pavilion, we are delighted to continue our mission of design excellence, privileged to expand our connection to the great tradition of Dutch design, and honored to bring to New Yorkers and guests from around the world the joy of nature, the pleasure in community and the value of great modern architecture.”

Home to the New Amsterdam Plein & Pavilion, the new Peter Minuit Plaza recalls the city’s earliest days as Nieuw Amsterdam, while heralding the future with cutting-edge architecture, modern amenities and 21st Century technology.  This rare park/transit meeting ground defines a new era in public space design and construction. Designed by Gail Wittwer-Laird of NYC Parks, the plaza weaves together trees, gardens, art, food and information with ferries, subways, buses, bikes and pedestrians.  It also demonstrates the commitment of the City, State and Federal governments, and a partnering Conservancy in creating a unique standard-setting park.

The Battery is a 25-acre waterfront park and the cradle of New York City history. Located at the tip of Manhattan overlooking New York Harbor, The Battery hosted Dutch settlers when they arrived at Manhattan Island in 1626 and established New Amsterdam.

Today with the leadership of The Battery Conservancy, a nonprofit organization established in 1994 to partner with government to design and rebuild these historic acres, the park is the largest and most dynamic public place in Lower Manhattan. It is the front lawn of Downtown and a hub of harbor access and cultural tourism. Over five million people, including residents, office workers, school groups, and tourists from around the world, visit the park and its major landmark, Castle Clinton National Monument, every year. The Battery Conservancy, with its partners at the city, state and federal levels, has raised over $116M to revitalize the park.