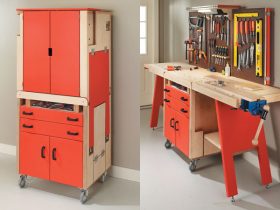 This apartment locates at the area of Tamsui River with good daylight and visible view of riverside. There are double living rooms and three bathing areas in the original pattern plan and large public space. Duo to the foreign living experience of the owner who used to take single storage room to replace the castle with the plan of the space cleaned up. Because the living function was focused in public area, the owner hopes that the clothes and jewelry could be placed in individual space.

Thus the designer removed the original wall and changed the scale of the partition wall on the floor plan. The mistress hopes us to combine the dressing room and the living room to an area. And we make the public area to a rectangle.

In order to keep the open nature in the whole space, this design focuses on the penetrability of the space. Making the view of the riverside and the advantage of the face to day lighting stand up. Designer changed the original way of the television wall and the visual view from the river mouth to river bend of the Tamsui River.

The television keeps the line of sight along the living room with L type window frame. The line of sight faces to the end of the view behind the dressing room that discriminates the privacy by opening and closing the venetian blinds. The color of the furniture and space dress with part of reddish orange and the grey is the main color in the whole space changing by the quality of material.

From the oblique ceiling of the entrance to living room, the designer used the big scale concrete tile to deal with the whole facade along to the end of the space. Combining the sofa and the tea table to a display shelf, it is a dividing line of an area.

When talking about the relationship with the space and the user, the designer mentions that this case is special because of the dog. This pet of the owner had been considered in this design. When the case had been finished, the dog uses the rest area beside the display shelf in the living room as the plan.

Thus the present of the whole space is closer to the requirement of the owner. The designer thought the space is depend on the balance between specialty design idea and the living style of the owner. At the end, the designer added the feeling into the whole space by details. The changes with the different between the condition of space and the user’s need created the living house with the owner’s style.