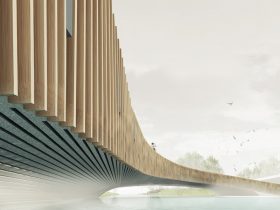 This Blobitecture Style concept have won a competition to design a 2000-seat church in Lagos, Nigeria. The project consists of variously-sized arches at four-metre intervals, creating a swooping roof. This steel structure will contain a two-storey congregation hall with glazing at either end emphasising the hall’s height. Construction is expected to begin in 2011.