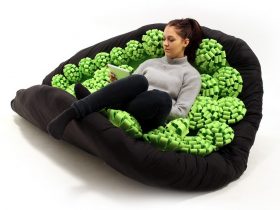 Lullock: A chaise Lounge that moves with you

Its spiral configuration is a spatial device which responds to the difficult topography, it is also a figure rich in coastal allusions.

By passing the spiral back through itself the house has become the mathematical concept of the Klein Bottle.

This strategy has unlocked a new series of relationships and sequential spatial experience.

The ‘contents’ of the ‘bottle’ are a rectilinear platform and walls which make the abstract geometry inhabitable.

A dramatic stair winds around an internal courtyard picking up the bedrooms of the house as it ascends, the journey ending in the great living room.

Externally the building is predominantly clad in cement sheeting, simultaneously recalling both folded origami, tents and the ubiquitous ‘fibro-shack’.

The building is supported on a traditional timber stud frame – pushed to its physical limit.