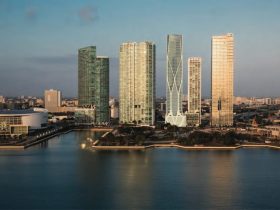 The Norwegian architectural firm, Snøhetta has revealed new site photos of the king abdulaziz center for world culture, a facility currently under construction in Dhahran, Saudi Arabia. The King Abdulaziz Center building broke ground in 2008, and tis expected to be completed in 2017, once complete, will offer a range of cultural facilities for local, national, and international guests. The ambitious 100,000 square meter development includes an auditorium, cinema, library, exhibition hall, museum, and archive. Snøhetta’s King Abdulaziz Center for World Culture is an engineering marvel that beckons visitors from afar.

The King Abdulaziz Center for World Culture is a bold new initiative on the part of the Saudi Aramco Oil Company to promote cultural development within the Kingdom. Following an invited architectural design competition in 2007, Snøhetta was selected to design this new prestigious cultural facility.

Located in Dhahran in the Eastern Province the Cultural Center will provide for a wide range of activities serving the local population and becoming a cultural landmark on both a regional, national and global horizon.

When completed, the project will contain diverse cultural facilities, including an auditorium, cinema, library, exhibition hall, museum and archive. The auditorium will seat 930 visitors and will provide for a wide range of events ranging from opera, symphony concerts, musicals and lectures etc.

Together with the smaller cinema, this will be an unrivalled venue for the performing arts in the Kingdom. The library will become a center of learning containing some 200,000 books on open access and catering for all ages and categories of users. The great exhibition hall will accommodate large scale travelling exhibitions, as well as providing the setting for social events, banquets and conferences. The museum and archive facilities connect the vibrant cultural life of the center to the past and to the very roots of the society from which this center is conceived.

On May 20, 2008, the foundation stone was laid by King Abdullah, the Cultural Center is expected to be completed in 2017.