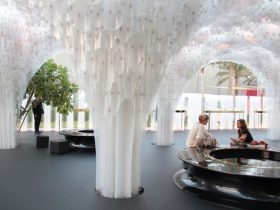 Henn has taken first prize in the international competition to design the Haikou Tower in China. Among the participants were Wilkinson Eyre, Broadway Malyan, Zaha Hadid Architects and RMJM/Alsop. The masterplan for the central business district of Haikou thus marks a major milestone in a series of recent designs by HENN.

Haikou Towers are projected to become the heart of the new Central Business District of Haikou, the capital city of Hainan, a tropical island in the South China Sea. The masterplan comprises an ensemble of 10 Towers ranging from 150m to 450m height with an overall building area of 1.5 million sq m.

Form and structure of the 450m high tower have been directly informed by the programme requirements of the building and the drive for an efficient structural scheme. The occupant needs for an office space and hotel room are distinctly different and have led to a shift in the structural system at the boundary between the two functions.

The shift in systems occurs at the hotel lobby area in the form of a large outrigger truss. This truss is purposefully exposed and integrated into the architecture to provide a clear distinction between functions and structural systems and is a key feature of the overall design.

The building height of 450m called for an intelligent, highly performative building envelope. The main requirement of the facade system is to react to differing sunlight conditions depending on the building’s orientation. The proposed facade achieves this with a panel unit system which is divided into two parts – an upper opaque part that blocks sunlight and a lower transparent part.

The division in each facade units allows the exterior to fold in and out. The folding angles vary according to the different sun-shading requirements, from north to south, from bottom to top. The increase of the folding angles allows for a smooth transition from the flat units on the north side to units on the south facade with a maximum angle of 30 degrees. The continuous differentiation of the facade harmoniously blends with the large-scale structure of the tower.