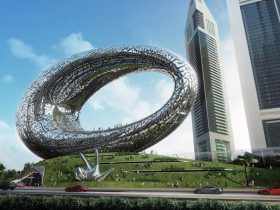 Dubai Museum of the Future: A New Iconic Landmark in UAE

The Chicago office of Skidmore, Owings & Merrill LLP (SOM) proudly announces that it has won an international competition to design the Greenland Group Suzhou Center Tower, in Wujiang, China. The 358-meter supertall tower will become the defining visual landmark for both the new Wujiang lakefront development and for the city as a whole.

Ross Wimer, SOM Design Director states, “This design is the result of a serious interdisciplinary collaboration in our Chicago office. Like a high performance car, the digital modeling of aerodynamics was critical to the shaping of the building. The design team included structural and mechanical engineers from the very beginning and their input helped to define all aspects of the tower.”

The 75-level building is designed to accommodate a complex mixed-use program including office, service apartments, hotel and retail on a 37,000 sm site. Sited prominently along Taihu Lake in the Jiangsu Province of China, the building’s curved, tapered form unifies the office, hotel and residential uses within a single volume. The tower features a 30-story tall operable window corresponding to the hotel and residential floors, that helps drive the environmental performance of the development.

The tower’s form is optimized to harness natural forces in and around the site to maximize its performance. High performance design engineering has been integrated into its design.
Bill Baker, SOM Structural Engineering Partner, comments, “This unique tower expresses the strength of the building in a way that is both interesting and structurally functional.”

The Wujiang Greenland Tower’s composite core and outrigger structural system use proven cost-effective construction techniques, while its unique split-core configuration of the upper floors increases the efficiency of the building structure. By placing half of the building core program on each side of the lobby and interconnecting them with structural steel braces, the combined core becomes more effective than a typical center core system while also creating a dramatic tall lobby space within.

The atrium is a key design feature of the building. It maximizes daylight penetration, facilitates mixed mode ventilation in the lobbies and public spaces, and acts as a fresh air supply source for the tower. The building is oriented to harness both the stack effect and prevailing winds via the east and west façades of the atrium.

Luke Leung, SOM Director of Sustainable and MEP Engineering, adds, “The design of the Greenland Group Suzhou Center utilizes an atrium as the ‘lung’ of the building to provide ventilation and will incorporate a series of high-efficiency measures with the objective to achieve a 60% savings in energy consumption compared to a conventional US high rise and a 60% reduction in potable water use.”

SOM Managing Partner Jeffrey McCarthy states, “This exciting new commission embodies SOM’s interdisciplinary commitment to elegant high-performance design. The Greenland Group Suzhou Center is designed not only for efficiency of construction and operation but to make a strong skyline statement about Wujiang and its bright future.”