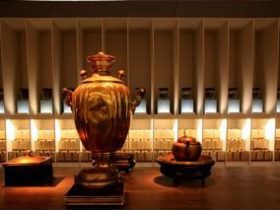 CHA CHA The Honored with IALD Award of Excellence

The aim of the project is to critically evaluate and rigorously reinterpret the basic rules, the structural and constructional logic of the Gothic tectonic system through the application of contemporary parametric tools and techniques, in order to create a series of autogenous interiorities.

This unique and protogeometric medieval system is perceived as one of force transmission and pure construction. The research design process commences from basic parametric experimentations which are based on the apprehension of the rib as a proto_design element. Further experimentation with the concepts of the parameterization of the Gothic vault bay, of field component organizations, of globally affected field and mesh geometries, as well as coloration induced structural patterns, inform the current system deployment tactics. The kaleidoscopic effect of the Gothic colored window panels became the inspiration for the application of color, which was used as the main generator of an autogenous and parametrically evolving parabolic vault bay system, leading to the creation of an urban club, featuring filigree interiorities of multi_layered complexity and richness, articulation and differentiation. These are generated in_situ in Vienna and constructed according to contemporary prototypical design and fabrication protocols.