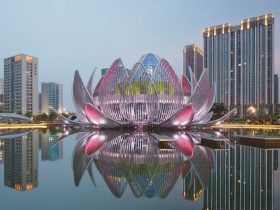 The design “Three Spirits” is thought as a floating tourist base in the form of the three ships – hotels. Each of these three units is an independently functioning building. The vision of an assumption originated on the basis of personal numerous drawing and painting studies and the search of a form, space and a color.

The ships making up a complex ,to a certain degree, differ as for the applied program. If the appropriate localization is chosen, they may form the common assumption – an island “Lang”. Guests can then benefit from the broader scale of supplementary attractions. On the first ship they have a ballroom at their disposal, on the second one – a casino and on the third one – the hall of multifunctional purposes where, inter alia, film shows and theatrical performances are possible. When the ships “meet” they generate a common water area for guests to swim.

One of the main attractions of a particular ship is a diving capsule. Guests can not only practice scuba diving but also they can dive safely in significant depth to see ,for example coral reefs or wrecks. The set of boats is also delivered for guests, and it enables them to choose an appropriate place for recreation, among other things also for scuba diving during the stopover of the ship. Since each ship is a separate unit there is a possibility of temporary separation of the “vessels” (“vehicles”) in order to carry out different cruises and afterwards a possibility of ships meeting again.

Each ship kept in a dissimilar interior style is a personification of one of the idols of Oceania and it has a possibility of simulation of its own “voice” and “thoughts”, and also has the knowledge of the underwater land and also its own knowledge which it conveys.Guests can communicate with their guide throughout a knowledge hall ( “the heart” of each ship) to ask the questions. Depending on the host`s character they are also educated by means of whispers present on the shipboard.

We can go by boat “Lowalangi” which besides the full information of the “underwater land” informs us about natural calamities which may happen or they just happen in the area.

We can adopt “Aluluei” as our guide. Aluluei registers the moments of its earlier voyages. Guests who used to cruise with it can go back in their mind and recall their earlier adventure, or reconstruct the most fascinating moments of the host`s cruises. They have also an insight into far-reaching enterprises of the whole assumption. The third host is Tane which can also inform about the history (situation) of the habitat (environment) which guests can meet on the islands the ship sails round.

The three ships owing to their sculptural forms seen on the horizon are to evoke bona fides impression of the fairylike creatures which attracts the beauty. They will appear only in the superb sceneries and the most interesting diving places, changing their context all the time.

Wandering the horizons they can lead their guests through their own world, showing it to them and telling them about itself. The guests immerse themselves in the land of water and oceans, having the contact with water, they approach the underwater world in which during a longer stay the border seems to evanesce…