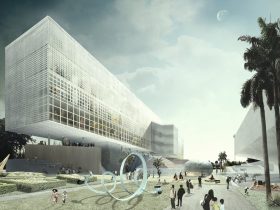 “Our proposal weaves together the history of the station with a potent new form creating a new public place for the future, resolving the functional challenges and celebrating the grandeur of travel.”

From The Architects: Our proposition includes the rationalization of some tracks to provide increased scope for structural support and servicing. This rationalization has been developed based on an understanding of the needs of the current, mid and long-term requirements.

The new concourse with improved, equitable platform access and barrier rationalization will improve capacity, wayfinding and. Intermodal transfers have been holistically considered to provide a seamless commuter experience including the introduction of a new tunnel linking all platforms and MMRT within the ticket enclosure.

Using the known loading points the scheme will be supported by pre-fabricated modular support columns, pre-cast header beams with steel framing over. The structural slab and finished surface is designed to provide falls and level changes where necessary.

This system allows for structural transfers from eccentric columns/loads above and for the distribution of services within the depth of the primary deck structure, ensuring maximum flexibility for above deck development. The deck provides a safe work environment that allows construction of the building over whilst allowing for continued rail operations. The superstructure will be predominantly steel framed with precast concrete elements.

Building services are proposed within the framework of a One Planet scheme. As much as possible they reduce demand, reuse waste (heat, energy, and material), are efficient, utilize renewable sources and provide benefits outside of the site. An analysis prepared on the scheme indicates that a tri-generation system is a viable for the site and potentially surrounding sites.

A DIVERSE MIX OF USES

There is 80,000m2 of available space across the site for various uses, including new functions in the Administration Building and the new development in the center and at the western end of the site. The primary uses are; associated rail functions, retail, commercial and hotel. This is supported by approximately 33,000m2 of new public space.

The narrow floor plate and length of the Administration Building create challenges for effectively reusing it as any single function, be it rail administration, retail or other. To alleviate this the proposal locates a mix of uses within its envelope, including:

• Rail administration at the eastern end

• Retail in the western end

• A new building runs parallel to the south facade of the administration building, containing retail (at the western end) and rail administration (at the eastern end). This new building provides circulation and extra floor space, new escalators, lifts, and stairs provide connectivity and enliven the new galleria space between new and old

• The fabric of the building is to be restored and renewed, including opening up areas to the public – including the Dome and the Ballroom.

The project is one of State significance and is in a complex statutory approval environment, including:

• State Government aspirations for the site, as articulated in the Brief for this competition

As a major transport hub within the Melbourne’s CBD context adjoining the Yarra River, there is a significant list of potential stakeholders. Consultation with stakeholder groups would be undertaken early in the preparation of planning documentation to ensure clarification and address of key issues and interests. Stakeholder groups will include those with an interest in the operational aspects of the site, including Metro Trains, V/Line, and Public strategic assessment. The consultation requirements are extensive and will be time-consuming.

As a strategically important, long-term infrastructure investment project, the redevelopment of FSS is a major commitment and opportunity for Victoria. Delivering the aspirations of the project, including triple bottom line outcomes within acceptable budget levels is critical to the success of the project. A project of this type has a 100+ year life, and investments in its design and construction need to be managed against this in a whole of life analysis.