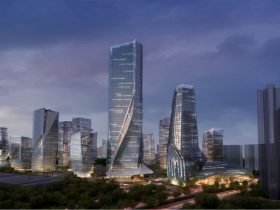 Aedas triumphed in the Asia Pacific Property Awards 2013 and received a record 15 awards amid keen competition.

At this year’s Asia Pacific Property Awards and Asia Pacific Hotel Awards, 15 projects designed by Aedas, spanning across Hong Kong, China, Indonesia, Malaysia and Vietnam, were awarded in a combination of categories for their design excellence.

Beijing’s Mixed-use Development in Xihongmen, Da Xing District and Chongqing’s Starlight Place were the highest scoring winners and will compete against other winning projects from Europe, Africa, the Americas and Arabia at the year-end International Property Awards 2013 to become the ultimate World’s Bests in the mixed-use architecture and retail architecture categories respectively. These projects represent the creative excellence in design which Aedas is committed to deliver to clients.

“We are thrilled to have received 15 prestigious awards in one year and to represent Asia Pacific against the world,” said Keith Griffiths, Member of the Board, Aedas International. “I am confident that our designs will stand out in the global platform.”

The Asia Pacific Property Awards are part of the long-established International Property Awards and the winners are recognised as a symbol of excellence throughout the global industry. Founded 19 years ago, these accolades distinguish excellence in the property industry worldwide and promote an international standard. The judging panel of the awards consists of approximately 70 world renowned professionals.