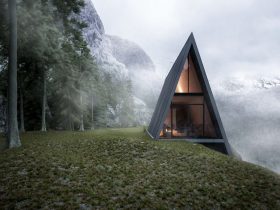 Building a cultural space in Beaumont-Hague, in Cotentin, means to integrate an architectural project that takes benefits from the landscape qualities of this piece of peninsula.

On the shore, sunken roads are planted of wooded hedges that protect from the wind and becomes vegetal vaults to filter the light over time. These landscape elements are secular forms from the site culture but also inspiring spaces that can be employed for the design.

The cultural space is a compact block 43m large and 11m high. We appreciate the changing play of the facade, alternating presence and lightness.

This versatile building combines program, urban scale, music, and nature. Inside, sustainability and function are emphasized. We are « digging » a covered pathway enlarged on the West angle of the ground floor to mark the entrance of the building.

This alley is like a street, a real public space. A main circulation with a lobby as a point of distribution for all program elements. The music school nearby the diffusion hall allows artists and students to meet and play music together.

The diversity of programs is a will to provide shared moments between users. From the public space, associations activities are clearly readable to assert their influence.